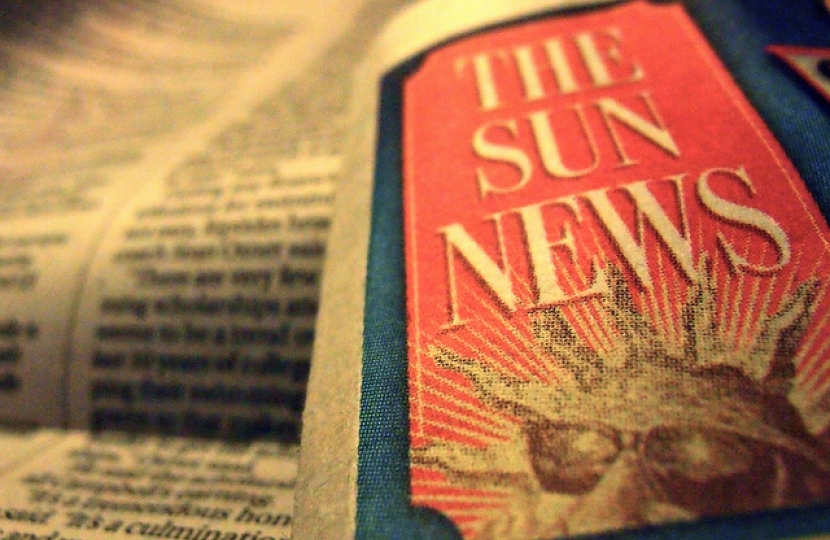 A proposed motion to boycott a national newspaper which is set to be discussed by Flintshire Councillors could signal the start of a dictatorship within Mold County Hall according to a conservative AM.

Councillors will be asked to back the proposals on what Ms Finch-Saunders, AM for Aberconwy has said is an ‘illegal’ motion.

Should the motion be voted through, journalists from The Sun would not be allowed onto council premises, under the Public Bodies (Admission to Meetings) Act 1960, this would illegal if they were attending a public meeting for example.

The motion will be discussed at a full council meeting on September 27, it also proposes to refuse to allow any person to bring the Sun newspaper into Flintshire County Council premises

Ms Finch-Saunders, says the proposal was a “typically spiteful” move from a Labour Party, she said:

“This is a childish and typically spiteful move from a Labour Party which no longer cares for the fundamental principle of free speech, and which no longer backs a free press.

“It’s an attempt at full-on state censorship of the media, and another bizarre turn from a Left Wing which no longer has the courage to debate its opponents.

“Whilst we might not like certain newspapers – and might question the impartiality of other platforms – we have a right not to consume their output. But we shouldn’t have a right to ban them.

“This is how dictatorships start, and Jeremy Corbyn should know a thing or two about them.”

Ms Finch-Saunders claims the move would be illegal if passed and could leave taxpayers open to legal proceedings in future, to date ten councils in England have passed similar motions including neighbouring Cheshire West and Chester Council.

The move by councils follows a social media campaign by ‘Total Eclipse of the S*n’ a group which aims to encourage stores not to sell newspaper because of an article it published in 1989 which wrongly blamed Liverpool supporters for the Hillsborough disaster.

The motion to be voted on by Councillors in Flintshire has been proposed by Deputy Leader Cllr Bernie Attridge and Cllr Kevin Hughes and says:

‘On 15th April 1989, a disaster at Hillsborough Stadium in Sheffield led ultimately, to the deaths of 96 innocent fans who had left home that morning to watch a football match.

Due to crowd control mis-management those fans, whose ages ranged from 10 to 67 years old, were unlawfully killed.

Contrary to the facts, the Sun published a front page story with the banner headline ‘The Truth’ which contained blatant lies.

Flintshire County Council wishes to express its disgust that these slurs on the victims of this disaster were published by a British national newspaper.’

3) Ensure Flintshire County Council does not advertise in the Sun newspaper.

4) Encourages Flintshire County Council to support the ‘Total Eclipse of the S*n’ campaign in any reasonable way possible – subject to Full Council agreement.