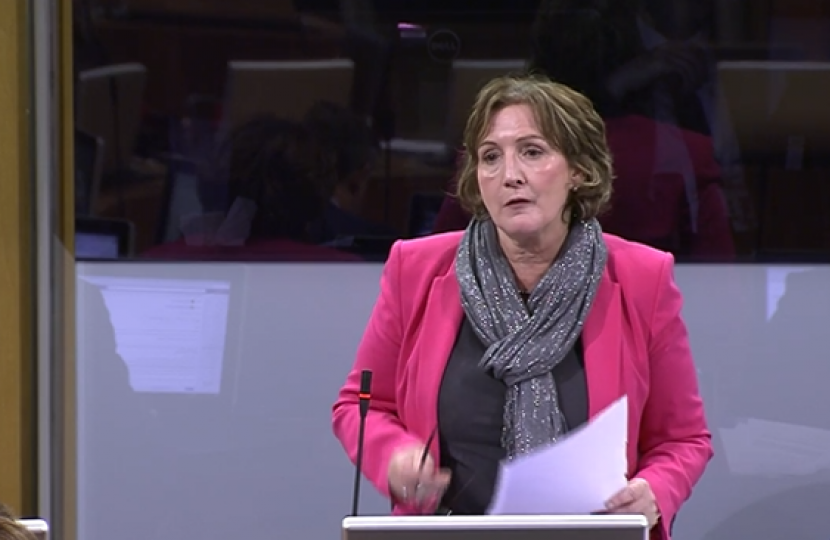 Further to the marl lane planning inquiry in September, and the ministerial deadline for the application being missed, Janet Finch-Saunders, Assembly Member for Aberconwy, has held the Welsh Government to account in the Senedd this week.

The Member’s speech and the response from Lesley Griffiths AM, Cabinet Secretary for Energy, Planning and Rural Affairs can be seen at the end.

After speaking in the Senedd, Janet said:

“Given that the Planning Inspectorate has missed the deadline for a decision on the Marl Lane inquiry, it is shameful that the Cabinet Secretary refused to comment.

“This application is of great concern to so many residents and myself, and despite an indication that a decision might be made soon, it could still be hanging over our heads during the Christmas break.

“What is also controversial is that the decision will take into account the new planning policy issued by the Welsh Government earlier this month.

“Whilst I appreciate that the appellant and planning authority have been invited to comment, it seems quite disrespectful to me that representations have not been sought from all interested parties – especially those of us who gave evidence at the inquiry.

“We must now just hope that the Welsh Government and especially the Planning Inspectorate remember the community and the strong objections put forward when making their decision”.

Questions to the Cabinet Secretary for Energy, Planning and Rural Affairs: Marl Lane

Will the Cabinet Secretary make a statement on the role of the Planning Inspectorate in Wales?

Thank you. The Planning Inspectorate is an arm's-length appellate body sponsored jointly with the Ministry of Housing, Communities and Local Government. The Planning Inspectorate in Wales makes planning and other decisions under allied legislation based on the adopted local development plan and national planning policy on behalf of Welsh Ministers.

Thank you, Cabinet Secretary. You'll be aware that there's been outrage in Aberconwy regarding the Marl Lane planning application and, indeed, the process so far. This was a decision by planning councillors, members of the planning authority, who refused it, only then for it to be suggested that it goes to public inquiry. This was in March of this year, and then the public inquiry was delayed until September of this year, and it is fair to say it was very, very controversial. In fact, the headlines were, 'Battle of words at Marl Lane planning inquiry'. Because, quite frankly, the site is a constrained site, not in the local development plan, and it was highlighted during the submissions to the consultation, during the meetings, and in correspondence to the inquiry, that it breaches TAN 24, TAN 5, 'Planning Policy Wales' 6.5, cultural heritage CTH/1, development affecting heritage assets, DP/6, compliance with national policy and guidance. Now, there is a feeling in Aberconwy, and the finger-pointing is actually going on, for a change, to here—as opposed to UK Government by this Government—but it is, in fact, the Welsh Government that, in effect, are allowing one individual to actually come in and make decisions above the heads of the locally elected members, myself included, but our locally elected planning authority—thousands of objectors. Now, we are still waiting for a decision on this site, and I would just ask the Cabinet Secretary to have some empathy with those who are very concerned about this site. We don't have the school places, we haven't got the capacity for our health service. There are numerous reasons why this planning application shouldn't go ahead. It should not have been dragged out so long, and I just wonder at what stage will you actually ensure that the planning inspectorate have a little bit more respect for the democratic process within our local authorities, and, indeed, for our own residents.

Deputy Presiding Officer, the Assembly Member will be aware that, in my role as Cabinet Secretary with the responsibility for planning, I'm unable to comment on a specific planning application.