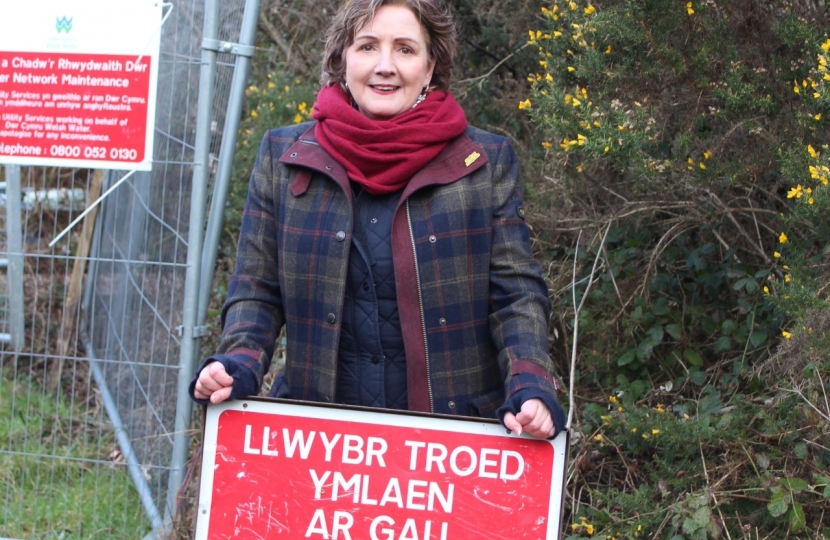 The Member of the Welsh Parliament for Aberconwy – Janet Finch-Saunders MS – has written to Welsh Water to underscore the objection of local residents at the decision to permanently close Dolgarrog bridge. Mrs Finch-Saunders has proposed holding a public consultation on the issue, to ascertain the impact that such a closure will have on future tourist travel to the area, access to the railway station, and active travel.

Of the situation faced by residents, Janet said:

“This bridge provides the only access route to Dolgarrog Railway Station from the beautiful village of Dolgarrog. Plainly, there is just no other alternative route for local residents. This objectionable decision by Welsh Water has effectively cut off an entire community from their railway station, which has just been subject to extensive repairs by Network Rail.

“By pursuing a permanent closure, Welsh Water is undermining the recent planning application for the development of a new hotel at Surf Snowdonia, Welsh Government active travel commitments, and does not realise the vital role of rail in confronting the global climate crisis.

“As a direct result of this decision, it is reasonable to foresee that there will be an increase in the use of private vehicles to access the West of the Conwy Valley, which is frustrating when considering the fantastic potential that Dolgarrog Railway Station has.

The Dolgarrog bridge carries two water mains over the River Conwy. In 1982, Welsh Water agreed with Conwy Council that they would allow the bridge to be used as a walkway by the public. However, it is not a designated footpath nor a public right of way.

Further commenting on her calls for action, Janet said:

“In respect of public safety, it is my understanding that Welsh Water has carried out a number of surveys and assessments on all aspects of the bridge. In my correspondence with the organisation, it was made clear that these included detailed examinations of suspension supports, pillars, wooden walkway and pipes.

“I have now asked Welsh Water to supply my office with clarity as to the recommendations made by these public safety professionals, the cost of their implementation, and whether Welsh Water will be giving the green light to such proposals. We must find a sensible forward solution.

“I am most keen that active collaboration with the community is restored. As such, I have proposed that Welsh Water urgently commit to undertaking a public consultation. This will provide interested constituents with the opportunity to voice their concerns, and provide time to review what steps can be taken to ensure that access to the railway station is restored.”