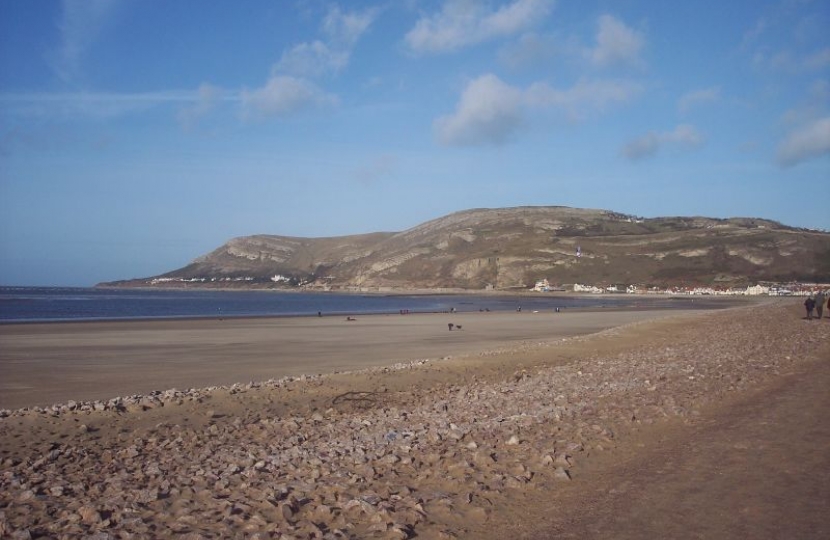 A campaign has been started to see the break in the Wales Coastal Path between Deganwy and Llandudno cleared. This is being led by Janet Finch-Saunders, Assembly Member for Aberconwy, who has written to the Welsh Government to ask for the decision not to maintain the route to be reconsidered.

Commenting on the campaign, Janet said:

“The coastal path is a treasure, and we are fortunate that communities all along Aberconwy’s coast are benefiting from it.

“Here in Wales, we should be proud of the fact that we had the first uninterrupted route along a national coast.  However, the highway has a major hump.

“I have been approached by residents from every corner of the constituency with complaints about the state of the route between Deganwy and West Shore.

“As it stands, people in wheelchairs are no longer able to use the route, and the amount of sand on the path is putting pedestrians off.

“I have been advised by the Deputy Minister for Housing and Local Government that the decision to limit maintenance on this section was made as part of our Local Authority’s actions to become carbon positive.

“Tackling climate change is a cause I am committed to, but I struggle to see how abandoning the path is going to contribute significantly to the cause.

“Similarly, the emphasis placed by the Minister on the fact that options are being considered during the detailed design phase for the Llandudno flood alleviations schemes are misleading as these solutions could take a considerable amount of time to be agreed and implemented.

“The path must remain open and equity of access restored, so I have asked Conwy to consider the route and walk where the Welsh Government will not”.

Will the Minister make a statement on the fact that the North Wales Coastal Path is covered by sand between Llandudno and Deganwy, and explain whether any action will be taken to clear the highway? WAQ78788 (e)

The Welsh Government’s Active Travel Programme has recently funded a fully accessible shared use cycle path that runs parallel to the coastal path linking Deganwy with Llandudno (West Shore).  There is also a Public Right of Way running adjacent to the coastal path through the golf course adjoining the sand dunes.

Conwy County Borough Council remains committed to establishing a more suitable route for the Wales Coast Path and options are to be considered during the detailed design phase for the flood alleviations schemes that are currently being developed for the Llandudno coastline.