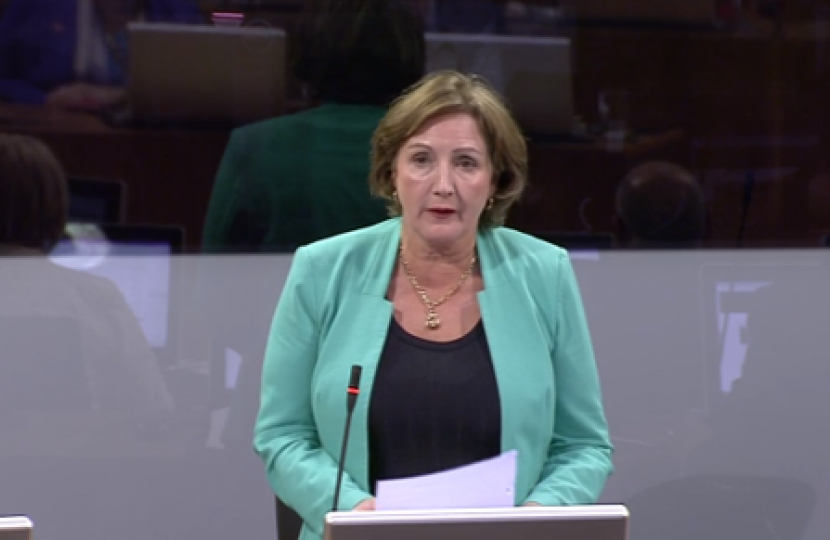 Following the recent death of an Ysgol John Bright pupil, Janet Finch-Saunders, Assembly Member for Aberconwy, and Shadow Minister for Children and Young People, has secured a commitment from Mark Drakeford AM, First Minister, during this Drowning Prevention Week, that swimming and water safety will be taken forward in the broader development of the new curriculum.

“Sadly, 263 people lost their lives in accidental drownings across the UK last year.

“The heartbreak caused by such tragedies has been felt here in Conwy following the death of Dylan Brown.

“Thanks to the selflessness of Debbie Turnbull and her work through River and Sea Sense, hundreds of thousands of young people and adults have been educated about the dangers of open water.

“Her heroic effort is helping save lives across Aberconwy, and has highlighted the importance of danger awareness and education.

“This is why I am pleased that the First Minister has responded positively to my questioning about the place of swimming and water safety in the new curriculum.

“I welcome his commitment to take the matter forward in the broader development of the new curriculum, and hope that this will help protect more young people near the sea, lakes, and rivers in this constituency and across Wales.

“Indeed, we need to be doing all we can to increase the number of children receiving water safety education, and reduce the number of drowning incidences”.

Transcript from Questions to the First Minister on 11 June 2019

Sadly the National Water Safety Forum's water incident database shows that 263 people lost their lives in accidental drownings across the UK last year, and only this year, First Minister, just a few weeks ago, a young boy of 13 in my constituency lost his life. River and Sea Sense, however, is a fantastic organisation based in Conwy county borough, and it was set up as a positive response to the tragic drowning of the son of Mrs Debbie Turnbull, Christopher Turnbull, at Capel Curig in 2006. This organisation—really, a sole lady doing this—has educated around 200,000 young people and adults across north Wales about the dangers of open water. She has gone into schools. But a lot of this teaching and awareness building, she's had to do on her own, with very little, if any, funding. Teaching the dangers of open water is essential, so I'm extremely grateful for the work of River and Sea Sense. First Minister, I would like to see our schools do more too, so will you explain what place water safety and drowning prevention will have in the new curriculum going forwards?

Response from the First Minister:

I thank the Member for that. I congratulate, of course, her constituent for the work that she carries out in memory of her son, Christopher. We know that right across Wales, there are really dedicated groups of people who take up a cause because they have had that direct personal experience of it in their own lives, and the hours and dedication that they provide to those causes is a remarkable and heartening feature of that sense of community that we are still lucky enough to have in Wales.

The Member is right to point to the importance of what goes on in school. By the end of key stage 2, we are clear that pupils should be able to swim unaided for a sustained period of time, and 64,000 pupils in Wales attended school swimming sessions in the last academic year. Pioneer schools involved in the new curriculum have already recognised that the importance of swimming goes far beyond it just being another mode of physical activity. And in the development of the curriculum through those pioneer schools, the emphasis on swimming has moved towards its safety aspects as well as to its recreational possibilities. So, I know that the Minister for Education is aware of that work and is taking that forward into the broader development of the curriculum on which we are currently engaged.

Debbie Ann Turnbull, originally from Rhos on Sea, has educated over 350,000 pupils through her River and Sea Sense project