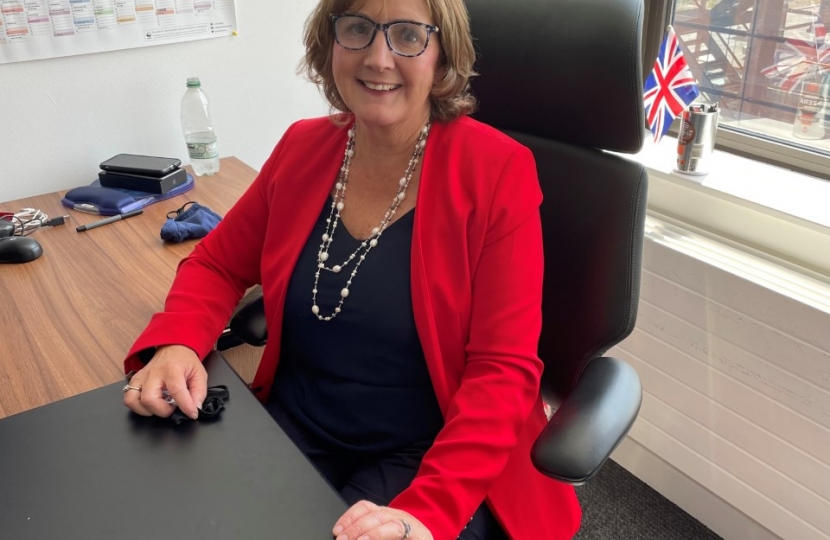 Following an intervention by Janet Finch-Saunders MS – the Member of the Welsh Parliament for Aberconwy – in the Senedd today, the Welsh Government has confirmed that it will make funding for defibrillators conditional on their registration on The Circuit. The British Heart Foundation is launching The Circuit with the Association of Ambulance Chief Executives, St John’s Ambulance, and Resuscitation Council UK.

Mrs Finch-Saunders was speaking as part of a Welsh Conservative debate on increasing access to such machines. Recently, Janet’s constituency staff were trained by St John’s Ambulance in the use of CPR and defibrillators. Her speech also called for the introduction of bold AED road signs and to underline her gratitude to her former colleague, Suzy Davies, who campaigned to make the teaching of life saving skills a requirement of the new school curriculum.

Commenting after her intervention, Janet said:

“British Heart Foundation Cymru have estimated that there could be hundreds or even thousands of defibrillators in communities across Wales which never get used because emergency services don’t know where they are. This is why I wished to see registration on The Circuit initiative a condition of funding.

“I am delighted that this suggestion is to be adopted by the Welsh Government. With 2,800 out of hospital cardiac arrests happening in Wales annually, we know that immediate CPR and defibrillation can more than double the chance of survival. Knowing where these machines are located is vital to saving a life.

“Many people travel the length and breadth of Wales on a weekly basis. In my journeys down to the Senedd from the constituency of Aberconwy, I can safely say that I have only spotted one AED - beside the A5 in Padog, Ysbyty Ifan. That is clear evidence of geographic disadvantage.

“Communities with lifesaving equipment should have bold signs informing the public of their presence. They should be as important as brown tourist signs, so it is vital that Welsh Government Ministers collaborate across departments to deliver AED road signs.

“We should also condemn, unequivocally, whoever was responsible for attacking an AED in Westshore, Llandudno. The utter mindlessness of the defacement goes to show that awareness of the importance of AEDs and CPR needs to improve.”