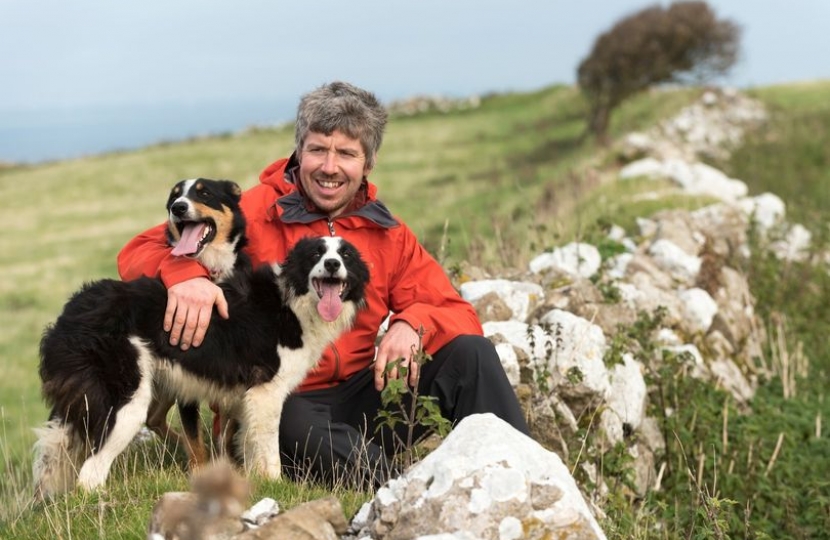 A council has answered criticism about taking to court a Great Orme farmer who says he has been almost ruined by a failed prosecution.

Conwy council claims that had the explanations of 40-year-old Daniel Jones been received earlier it was possible the proceedings would not have started. But today the Farmers’ Union of Wales rejected the council’s explanation which it had heard “with disbelief”.

Janet Finch-Saunders, Assembly Member for Aberconwy, said she would still be supporting the union in their demand for an inquiry. They are urging that the council should compensate Mr Jones.

The case at Llandudno court collapsed when charges involving the movement of animals and the finding of three sheep carcasses were dropped.

Mr Jones had borrowed £50,000 to fund his own defence and had to sell 300 sheep and machinery and says he suffered months of turmoil.

Mr Jones became known world-wide when he was chosen by the National Trust for a £1-a-year farm tenancy on the wild and challenging headland at Llandudno from thousands of applicants, some from abroad.

Conwy did not respond initially when asked if there would be an inquiry into the prosecution, as demanded by the union, or whether an apology would be made to Mr Jones.

However Iwan Davies, Conwy’s chief executive, has written to Mrs Finch-Saunders saying: “I am convinced that Conwy’s officers went about their jobs diligently and, having taken legal advice, concluded that prosecutions were warranted.”

He added : “Had Mr Jones’ explanations been forthcoming at an earlier stage then it is possible that proceedings would have ended sooner, or, indeed not been started.”

But Mr Jones' lawyers, who blasted the prosecution as a "malicious witch hunt" said they had co-operated fully with the council, and without any obligation to do so had given the council all 22 defence statements in the hope of averting a trial.

A letter has been sent to councillors from himself and the Head of Regulatory and Housing Services, Peter Brown, stating that an investigation was started after a complaint by a member of the public “about sheep carcasses lying around the Great Orme.”

According to the council “numerous” were found in varying stages of decay and alleged anomalies were found in the farmer’s records.

The letter to councilors states : “Mr Jones made alleged admissions to various possible offences during interviews whilst under caution and in the presence of his representative.

“We started the prosecution proceedings when it was clear a prosecution was in the public interest and there was a reasonable prospect of conviction based upon the evidence. The evidence had been reviewed by our legal team at that stage, which included an external barrister.

“The defence’s bundle of evidence was submitted to the council only a few days before the case was due to be heard. “

The letter states that Mr Jones’ formal evidence started three days into the hearing and for the first time he gave a detailed explanation of the discrepancies.

“Although it was last minute, Mr Jones’ account was credible and having consulted with officers and acting in the best interests of the council our barrister took the entirely appropriate view that in the circumstances there was now no reasonable prospect of conviction. In the interests of saving money the council took the view that it wasn’t in the public interest to pursue the remaining two offences.

“If the defence had provided Mr Jones’s detailed explanation and original paperwork at any time before the proceedings had started then the council would have had the opportunity to review or withdraw at an earlier point.”

The letter points out that the District Judge made an order for Mr Jones to claim costs from court central funds – not the council. The costs of the council barrister came to £8,475.

The letter declares : “The District Judge made no criticism at all of the council’s case or the conduct of the investigation or proceedings and he made no wasted costs order against the council as a result of any unnecessary or improper act as he is empowered to do so.”

Gwynedd Watkin, county executive officer for the FUW responded : “I hear the council’s explanation with disbelief. Dan Jones has been transparent from day one and fully co-operative. I’m very disappointed, what they say simply isn’t right.

“In his first interview their words were ‘we are here to help you’ , which I believe were simply meant for the tape. I’m astonished by their response now. As for the barristers’ costs of £8,475 – what about the other money spent on bringing this case?

“I am meeting Mrs Finch-Saunders next week and also hoping to meet Mr Iwan Davies.”

Mr Jones's solicitor David Kirwan blasted the council's defence of the case and said they were merely trying to 'save their reputation'.

And he branded the prosecution "'a malicious witchhunt" against Mr Jones.

Under UK criminal law there is not obligation for the defence to reveal their case ahead of a trial.

But Mr Kirwan said the council had all of the evidence long before the court case and he even took the highly unusual step of sending 22 defence statements to the council weeks before the trial "for transparency and in the hope of avoiding a trial".

He said nine charges were then dropped but 11 went to trial.

Mr Kirwan added Mr Jones had co-operated fully with the council throughout.