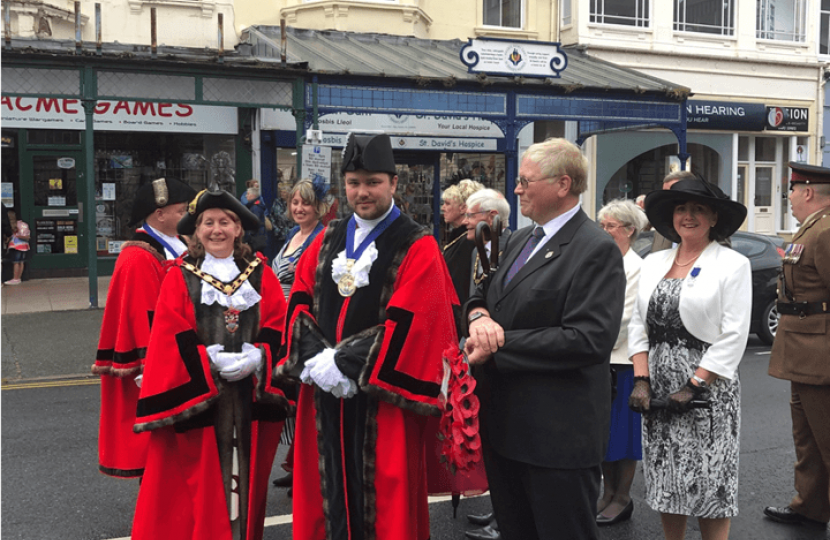 Several hundred turned out to see the Mayor, Councillors and visiting civic dignitaries. Attending the service and parade was the Assembly Member and former Llandudno Mayor, Janet Finch-Saunders.

“It is always a privilege to join elected members and the Mayor for such a prestigious occasion and this year was no exception. Llandudno Town Band consisting of many young musicians led the parade magnificently as the marching sounds boomed through the streets of our town.

“Having served previously on the town council with our mayor Cllr. Angela O’Grady, it was a pleasure to accompany her to Our Lady Star of the Sea Catholic Church in Llandudno, where the Rev. Father Moses led a very poignant communion service.

“It was also a pleasure to accompany Cllr. Harry Saville in this year’s parade and service.  It is certainly most encouraging to see young people coming forward to step up for such a prestigious role and I wish him all the very best for the ensuing year.

“A special mention must also go to all the voluntary groups, to include our local Brownies and Guides, Beavers, Cubs, and Scouts, who turned out very smartly dressed to this important event.

“A huge thanks must also go to the Town Clerk Ms Tessa Wildermoth, Louise Morris, and Cheryl Reynolds for all their splendid organisation to ensure the event went so well”.