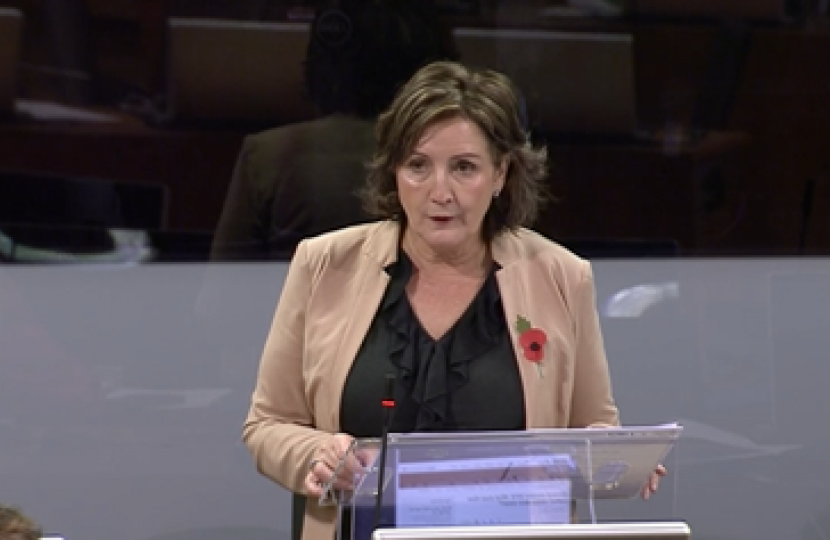 Thank you. On behalf of the Petitions Committee, thank you for the opportunity to introduce this debate today. This is the eighth petition to have been referred for a Plenary debate, having received more than 5,000 signatures, since the process was introduced in March 2017. The petition, 'Make Learning Disability training mandatory for hospital staff', was submitted by the Paul Ridd Foundation, having collected 5,654 signatures. The foundation was established in 2016 by the sister and brother of Paul Ridd, who died whilst in Morriston Hospital in Swansea in 2009, at the age of 53.

Now, I want to start by describing some of the background to this petition and, in particular, to speak about Paul Ridd. From birth, Paul had severe learning difficulties, which meant that he spent most of his life in care. On 31 December 2008, he was admitted to hospital with a perforated bowel. This required major emergency surgery and, following the operation, he spent three weeks in intensive care, under sedation. Following this, Paul was moved to a general ward and his sedation was reduced. It was at this point that his family describe a deterioration in the care he received. They also felt that he was moved prematurely. They have referred to a number of issues that arose in relation to his care on the general ward. These included a loss of his notes on arrival, delays in administering medication, long periods with no observations taken, and a lack of recognition given to signs that his condition was deteriorating. This is heartbreaking and sadly serves as a reminder of health cases most of us here will be handling for constituents today. But, underlying all of these concerns is the petitioners' view that medical staff did not take Paul's learning disabilities into account or listen to the concerns and observations raised by his family and carers. Sadly, Paul died in hospital on 23 January 2009.

Now, two years after his death, the Public Services Ombudsman for Wales published a report into complaints made by Paul Ridd's family. This upheld many of their concerns and concluded that Paul's nursing care on the ward had been very poor and, when combined with his clinical care, had produced an unacceptable level of treatment. A coroner's report, following an inquest in 2013, found that he had died from natural causes that were contributed to by neglect.

So, I certainly wish to offer my condolences to Paul's family, at this point, for their loss, and also to commend them for the work they have done since then to ensure that lessons are learnt. I am sure that their commitment to improving the care that people with learning disabilities receive in hospitals will already have helped countless other individuals.

I will now move on to the specifics of the petition. Now, as I have mentioned previously, Paul's sister, Jayne, and brother, Jonathan, established the Paul Ridd Foundation in 2016. Their work has already led to the development and launch of a pathway care bundle for people with learning disabilities in 2014, with some support from the Welsh Government. This is designed to help hospital staff ensure that people with learning disabilities do receive a fair and equitable service when they visit hospital. However, when the Petitions Committee first considered the petition in January, the petitioners described concern over difficulty ensuring that the care bundle is implemented consistently throughout Wales. Key to achieving this, they argue, is for learning disability awareness training to be made mandatory for staff in hospitals, as outlined within their petition. So, this training would start from the principle of what a learning disability is—an understanding that the Paul Ridd Foundation contend is frequently missing amongst staff in practice.

Training should stress the importance of delivering an equal standard of healthcare to people with a learning disability, and to inform all staff of the need to make necessary adjustments to services, so that they are responsive and flexible to the individual needs of patients. It is this type of tailored care that they consider was lacking when their brother was receiving hospital treatment in 2009.

As well as the benefits to the individual patient, the foundation stresses that providing this training will assist staff to perform their roles to the best of their ability, and to do so for all patients in their care. They describe their view that training would complement the existing pathway care bundle by ensuring that all NHS staff are informed about its existence and what it covers, and that this would help improve what they describe as 'sporadic awareness' of its existence at present.

The foundation describes successfully delivering training of this type to over 1,000 learning disability champions, many of whom believe that the training should be mandatory for all staff. I am also aware, as I am sure other Members are, of other families of people with learning disabilities who are concerned about the care that their loved ones receive from the health service.

The most important thing is that it's not online training followed by a multiple choice test that people can take a number of times. People have to be properly trained.

Thanks to my colleague Mike Hedges AM for his intervention. And that is the point and principle, really—one of the main points and principles behind this petition.

Now, in advance of this debate, I have received correspondence from others supporting the petition, and I have been seriously saddened by reports, such as that after the death of an individual with severe learning disabilities who could not speak, an inquest allegedly found that the individual had not received appropriate care and treatment, and that health board staff did not respond appropriately or with sufficient urgency to the individual's presentation.

The Petitions Committee has also considered developments in England, where the outcome of the consultation into proposals to introduce mandatory learning disability and autism training for health and care staff is still awaited. We could await for the publication, but I ask Members here today—and this is what the petitioners are asking—why should Wales not lead the way? We need to see progress here. Currently, it is estimated that one in four healthcare professionals have never had training on learning disability or autism.

I must acknowledge the statement issued by the Minister for Health and Social Services earlier this year that £2 million has been made available over the next three years to improve NHS services for people with a learning disability. However, money alone will not achieve the core aim of this petition: making learning disability training mandatory for hospital staff. Similarly, whilst the Paul Ridd Foundation value the Minister's commitment to the Improving Lives programme, they have reiterated that mandatory training will be key in delivering the outcomes of the healthcare issues in that programme.

I will leave the final word in my remarks today to the Paul Ridd Foundation. Their purpose since his death has been that another family would not have to go through the same experience when in hospital and to ensure that all staff are supported to see the person, not the disability. It is considered that making learning disability training mandatory for hospital staff would go some way in achieving this. Diolch yn fawr.

Thank you, Deputy Presiding Officer. Well, first off, I would like to thank the Deputy Minister for what I think has probably been one of the most positive responses that I've heard in this Chamber since I've been an Assembly Member. You've listened, you've acted and I think you've gone one step further, really, to actually make this petition very meaningful. And it really only remains for me to thank the Paul Ridd Foundation and, indeed, Paul's family, again, for bringing this petition forward and for their work—hard work—in seeking improvements to care for people with learning disabilities.

Of course, the Petitions Committee will now consider the petition again in light of all the contributions made. I think that the contributions made from fellow Assembly Members here today again made it very evident that we do take petitions very seriously indeed, and that this one in particular was very, very important. We will obviously discuss your response during committee, but on behalf of the committee, I would like to thank every Member who has stayed for this debate today, and huge thanks again to you, Deputy Minister. Diolch yn fawr.