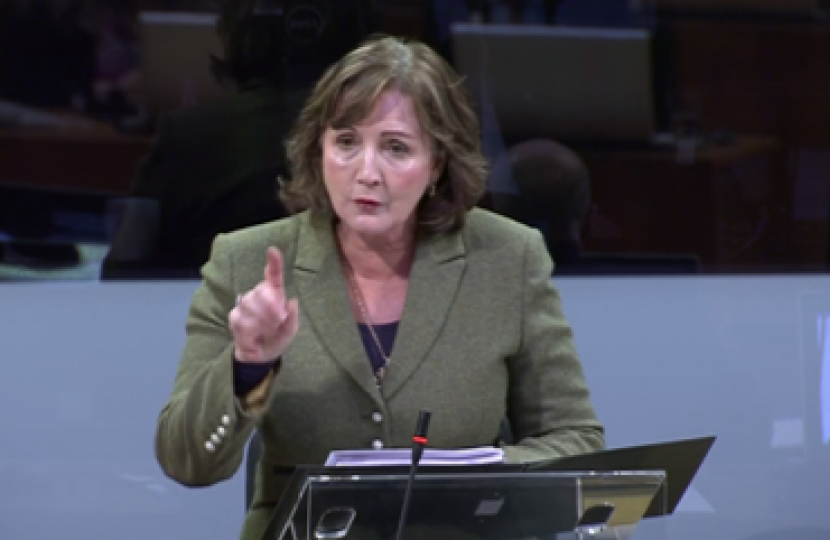 Will the Minister make a statement on Welsh Government efforts to alleviate the situation facing residents in the Conwy Valley following recent floods?

Lesley Griffiths AM, Minister for Environment, Energy, and Rural Affairs:

I have today issued a written statement regarding flooding from storm Ciara. The impacts have been felt across Wales, in particular, in Llanrwst and Llanfair Talhaiarn. My sympathies are with those flooded anywhere in Wales, and I thank the local authorities, emergency services and Natural Resources Wales teams, working tirelessly in some appalling conditions to keep us safe. Where there has been flooding, local authorities now need the opportunity to investigate and report their findings. Our investment will continue to support local authorities and NRW to develop further flood alleviation schemes, where they will be effective at preventing future flooding.

Thank you, Minister. Yet again, Aberconwy, from Capel Curig to Deganwy, has been hit hard by flooding as a result of a storm Ciara. However, for my constituency, the shock and devastation is at its worst in Llanrwst, Trefriw and outlying areas. I was there yesterday, and saw first-hand the overwhelming damage that has been caused to many shops, businesses and residential properties, seeing individuals at a loss and feeling totally helpless as they fought to clear sewage and mud from their homes is heartbreaking, and constituents telling me again how distraught and vulnerable they feel, and that this is the worst flooding they have ever experienced, many having lived decades there. But at this point, however, I too would like to put on record my thanks to the emergency services, the local authority, and all residents for the selflessness that they have shown in trying to help each other, and the community, to deal with such devastation. It was remarkable to witness the community spirit that has arisen from such a disaster.

Minister, this is not the first time that I have raised the frequent flooding of the Conwy Valley with you. Just two weeks ago I submitted a written Assembly question asking what steps you were taking to hold an independent review of flood mitigation measures for the Conwy Valley. My reason was the frequency of these flood incidents in these parts. Now, you replied, stating that

'Natural Resources Wales reviewed the Conwy Valley flood alleviation scheme in 2018. The review confirmed communities in the Conwy Valley are benefiting from reduced flood risk as a result of the scheme at this time. There are no plans to carry out any further reviews.'

Now, Minister, it's flooded since 2018. As you well know, it flooded last year about this time. So, I consider that response to be woefully inadequate, and that it now certainly needs a rethink on your part.

So, question 1: can the Minister tell me why the usual flood warnings by NRW were not in place in adequate time, bearing in mind the numerous news bulletins that storm Ciara was on its way? Two: as this has now been considered a significant incident, what funding will be available from the Welsh Government to the local authority to assist with the clean-up, and how will this filter through to the very residents and businesses so badly affected? Very sadly, some of whom have no insurance because of the level of repeat flood incidents. Three: given the shocking state of events in these parts over the weekend, will you now review the advice given to you by NRW, and support the many calls within the community, and from elected Members, for an independent review of the mitigation flood measures in the Conwy Valley?

And, finally, will you come to Aberconwy, and will you visit with me some of those most affected by recent events? Diolch yn fawr.

I think you raised several issues that need addressing. So, you're quite right, I did answer you a couple of weeks ago, and, as I said, we did have a modelling review of the Conwy Valley. That was concluded in 2018. Now, I will be expecting, obviously, the local authority and NRW to look into what needs to be done, and they will bring forward recommendations. I'm not going to speculate on the causes. It does appear that many of our river defence schemes did their job. Of course, the river levels were incredibly high, so we need to look at the recommendations that come from both the local authority and NRW.

I think there are a lot of questions to be asked. I too received copies of correspondence from some of your constituents, and I notice you've been copied in as well—concerns around the responses that were taken up, and I think you need to have a look at that and maybe take up those issues with the local authority directly. We have put significant funding, as you know, into flood defences—over £350 million across Wales in this Assembly term. But, of course, whatever recommendations come from the investigations that NRW and the local authority are doing, I will seek to see what we can do to continue to support those areas.

I again thank everyone for their response to this at the weekend. I think you make a very important point about volunteers as well, and the community. And, certainly, watching news reports last night, that was very clear to see. But as I say, I will not speculate. What we need to do is look at what caused this, and have a look at any recommendations that come from the investigation.