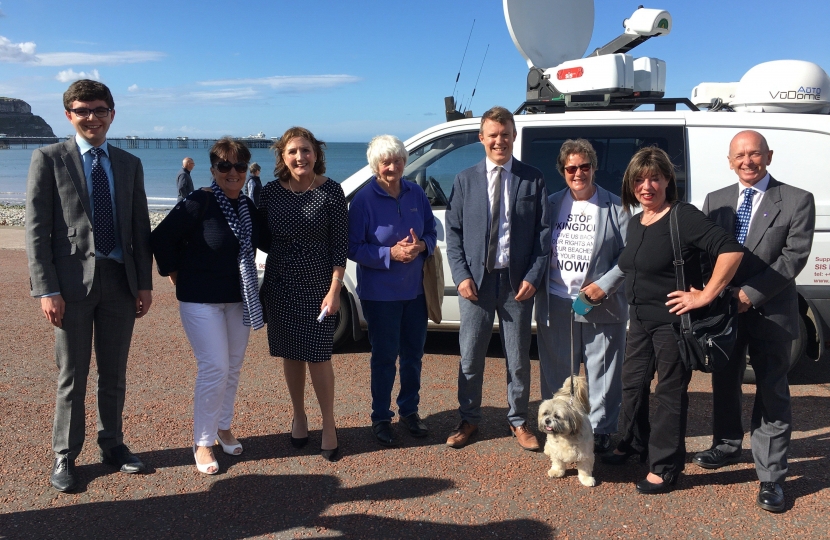 Ahead of a meeting of Conwy County Borough Council’s Economy and Place Scrutiny Committee, local Assembly Member, Janet Finch-Saunders, commented on a report to Councillors from CCBC Officers, which recommends extending Kingdom’s contract for another year.

The company has been the focus of much media and public criticism over recent years.

Controversially, the previous contract had a target of 100 FPNs per year to be issued for dog fouling offences written into it. This has now been recommended for removal.

“A clean and safe environment for everyone is of utmost importance – no one is denying that. But the manner in which enforcement action has been undertaken on behalf of Conwy County Borough Council in recent years has raised many concerns amongst the public and media.

“I have been contacted by visitors and tourists to the area, as well as businesses, who say they will not return after a bad experience – and have been made aware of a considerable number of residents in neighbouring counties who will not be visiting for Armed Forces Day – one of Llandudno’s most prestigious events – such are their concerns.

“Other local authorities in North Wales have terminated their contracts with Kingdom – quite publically – and I strongly urge Councillors to take full account of the concerns being raised with them on this matter by their residents.

“It is most concerning that the Council have left this matter so late to discuss. In suggesting that there are no alternative options ready to be implemented by the time the current contract ends[1], this would seem to be something of a fait accompli – which is excessively disappointing. [See Section 3.12 of Council report.]

“The Council note that extending the contract would give them time to consider and decide on different environmental enforcement options open to them, and I find it incredibly disappointing that they have not yet done so – given the considerable amount of public and media pressure on this matter for many months – even years – and the statement of the Cabinet Member himself that ‘this is an opportunity for change…so that a better solution can be sought’.

“Whilst the Council have stressed that this is not about generating income, the concern noted in their report that ‘without enforcement there would be an immediate loss of net income to the council in for order of £100k from Fixed Penalty Notices issues’[2] would beg to differ. And with the proposed increases in FPN levels to £100 and £125 – this now has a potential value to the Council of £200,000[3] – which they have already taken account of in their budget – so this really seems to be a done deal already.

“We want our residents, visitors and tourists to feel safe and enjoy a positive experience in and around Conwy County. Endorsing a company which pays a bonus to its staff for meeting the minimum quality standards[4], does not inspire confidence in the Council’s vision for this.

“It costs the Council over £2m annually to clean our open spaces – but much of this cost will surely come from the increases in fly-tipping incidents which are the scourge of our beautiful towns and countryside.”

The documents can be found here [Item 7a]: http://modgoveng.conwy.gov.uk/ieListDocuments.aspx?CId=939&MId=7138

“It is recommended that Members… Extend the current environmental enforcement contract with Kingdom Security Ltd for 1 year from 10th August 2018” [page 1, 2.1].