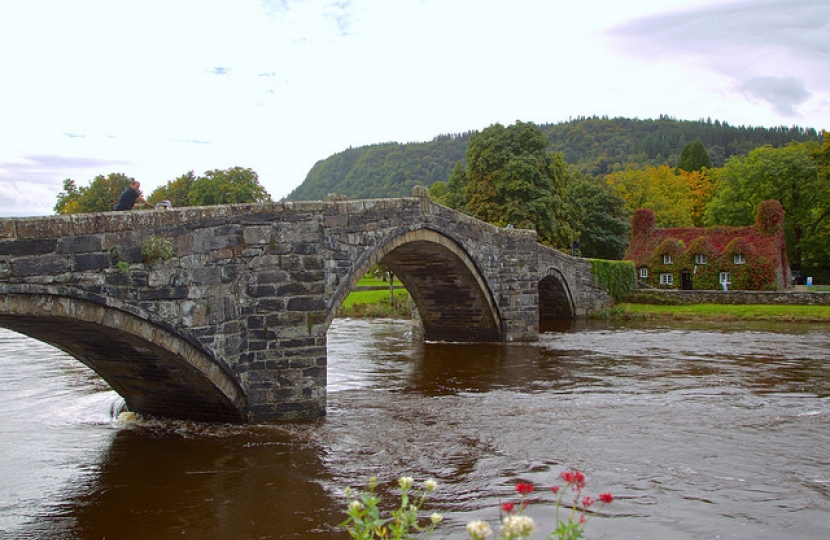 Following the most recent sewage overflow into the Conwy River at Llanrwst, Janet Finch-Saunders, Assembly Member for Aberconwy, has been working with Welsh Water and Natural Resources Wales (NRW) to identify and address the cause so that no further threat is posed to our environment.

With the investigation finding that the overflow was caused by pump failure due to a blockage, Janet has joined with Welsh Water in promoting the “Let's stop the block” campaign.

“There is a history of sewage overflow incidents in Llanrwst which have caused justifiably serious concerns about damage to the environment and whether the system is actually fit for purpose.

“After the incident last April, I have been liaising with NRW and Welsh Water.

“I have been relieved to learn that early results of the full ecological survey of the river is indicating that no lasting damage has been caused and that the river at Llanrwst is in good health.

“Also, following the organisations’ investigation into this chaos on the Conwy, I have been advised that the situation was caused by a blockage.  This consisted of rags which included wet wipes, fat and other sanitary products.

“Going forward, I welcome the fact that Welsh Water will be introducing new equipment at the pumping station and increasing cleaning frequency.

“However, there is also positive action we can and should take. This is supporting the “Let’s stop the block” campaign by ensuring that we make a serious effort to stop flushing wipes, nappies, cotton buds and sanitary products down the drain.

“These small actions by thousands of us across Aberconwy and especially in Llanrwst will have a positive impact on the sewage system and therefore our environment.

“Whilst I hope that we can all make a special effort, in the meantime, you can be sure that my investigation into the capacity of the Llanrwst sewage system will continue. Currently, I know that it serves 1,707 properties, but am looking to liaise and work with Welsh Water to see further evidence that the network is actually fit for purpose”.