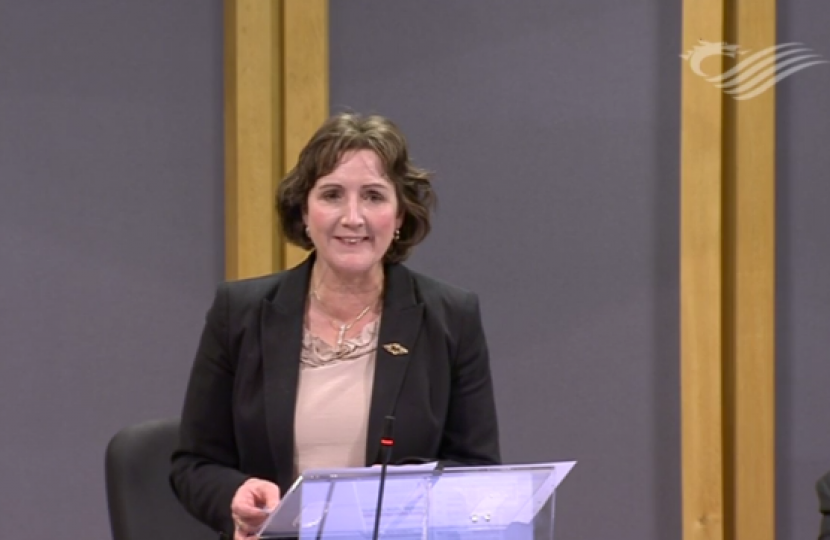 I call on Janet Finch-Saunders to move amendments 1 and 2 tabled in the name of Paul Davies.

Notes the work of the Older People's Commissioner to tackle the impact of loneliness and isolation on older people living in Wales and calls on the Welsh Government to do more to address this matter.

Notes that, to ensure that older people have a strong voice in line with the Older People Commissioner's recommendations, the Welsh Government should consider introducing an Older People's Rights Bill to extend and promote the rights of Wales's older people.

Diolch, Ddirprwy Lywydd. I move amendments 1 and 2 in the name of Paul Davies.

There are some 800,000 older people in Wales who deserve every opportunity to be empowered to have their rights strengthened and their needs fulfilled, and I would like to start my contribution today by paying tribute to our Older People's Commissioner for Wales, Miss Sarah Rochira, for campaigning so tirelessly to achieve that. I am not alone in recognising the professionalism that Miss Rochira has brought to this role—she’s certainly a real champion for our elderly here in Wales. Her work on scams and swindles, care homes, ageing well in Wales, domestic abuse and ageism demonstrates the wide range of issues impacting older people, which we recognise today. The commissioner opens this report by referring to older people in Wales as ‘a phenomenal asset’ and ‘everyday heroes’. With a contribution of £1 billion each year to our economy through childcare, volunteering, care and community work, it is fair to say that this is a great description. Yet, all too often, the value of these ‘everyday heroes’ goes unnoticed or unrecognised. It is completely unacceptable that too many older people, particularly those who may be more vulnerable, see their rights diminish as they get older, and as they really need that support most.

A year ago next week, on Human Rights Day, the commissioner called for legislation to protect and promote the rights of our older people here in Wales. Our amendments today seek to strengthen the commissioner’s calls through the introduction of an older people’s rights Bill. We want to see a single piece of legislation to clearly enshrine the rights of older people within Welsh law. We want to see a duty of due regard on all public bodies; to place a duty on the Welsh Government to promote knowledge and understanding of the rights of older people across Wales; and to introduce measures to tackle ageism, promote ageing well and embed older people’s well-being within public service delivery.

The fact that the commissioner’s casework team provided assistance and support for 413 older people across Wales last year shows that we still have progress to be made, particularly in the areas of care and residential care that, combined, made up a considerable amount of such casework. The commissioner identified the key themes that came across in her casework as accessing continuing healthcare funding, the impact of care home closures, and the overall cost of care. These are themes that I, too, have picked up on in much of my own casework, and are part of the reasons why Welsh Conservatives want to see a cap on care costs, much improved joined-up working between the health and social care sector, and much better bed provision, to prevent those terrible delayed transfers of care that we all in our constituencies know about, and to ensure choice, suitability and the right location for those who need care.

We have used our amendments to highlight the issue of isolation among older people. This is a concern that the commissioner has focused on previously, and we want to ensure that this Chamber does not forget the impact that loneliness can have on a person’s physical and mental wellbeing, particularly around this time of year. Loneliness can have an effect on mortality similar in size to smoking 15 cigarettes a day. New research has found that people with early signs of Alzheimer’s were 7. 5 times more likely to be very lonely. So, let’s use this report to commit ourselves towards making Wales the first dementia-friendly nation in the United Kingdom. Dirprwy Lywydd, we are fortunate to have such a dedicated and committed commissioner working on behalf of older people across Wales, and I will say this: I would like to see that role, where people are doing a really good job—I know it’s time-related, but I would like to see some people actually staying in the role and continuing the good work that they’re doing. That is one role that I particularly believe should continue, and that person.

Let us ensure that we are working in tandem to create an age-friendly Wales, ensuring that older people are able to access the services, the support and the care they need and deserve, and that they are empowered to continue to lead rewarding and fulfilling lives, enriching our social fabric as only those with their own life experiences can do. Diolch.

Janet Finch-Saunders AM is the Welsh Conservative's Older People's Champion in the National Assembly for Wales.