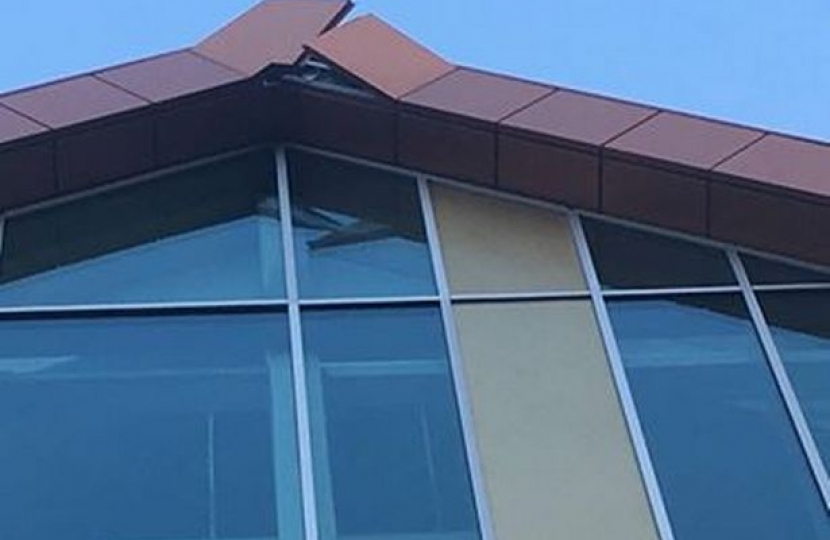 Conwy Council's brand new £38m headquarters has already been hit by problems after pictures emerged appearing to show loose tiles on the building.

Two of the building's tiles, which form part of the apex of the facility's roof, have apparently come loose with photos showing them hanging partially free from the building's edge.

The gleaming building - which could end up costing the taxpayer £142m - was constructed despite criticism from political opponents who said such a build was ill-conceived during a climate of austerity.

A witness who saw the damage said they had got in touch with the council over the weekend in order for them to deal with the problem.

Strong winds have hit North Wales over the weekend, with gusts rising above 50mph in Colwyn Baybetween Friday and Saturday.

See here for Conwy Council's full response to the photos.

The Daily Post reported earlier this month that taxpayers could be lumbered with a £142m bill for the headquarters, which provides working space for 700 council staff members.

The building cost £31m to build, with a final sum of £38m when other costs were added in.

But the council entered into a deal which sees them renting the building until 2057 before they can purchase the building from developers M&G for £1.

The local authority also has responsibility for the repairs and maintenance of the building despite only renting it.

Janet Finch-Saunders, Conservative Assembly Member for Aberconwy, previously said: "When the proposals first came forward by the previous cabinet we were advised that there would be a cost to the taxpayer of around £35m.

"This was corrected to include the rent or so we thought and increased to £58m.

"To learn that in total the figure is more realistically over 100m, questions must be answered."

He said: "Staying as we were was not an option – we were occupying offices in drastic need of upgrading and also needed to relocate a number of our staff as we had been given notice to leave office space elsewhere.

"At the outset of the project, we occupied some 25 buildings but by streamlining and consolidating those we now have just three main sites. But this is not about buildings, it is about people.

"By bringing services and partners together in a welcoming environment, we can serve the people of Conwy in a space that is comfortable and pleasant for them to visit."