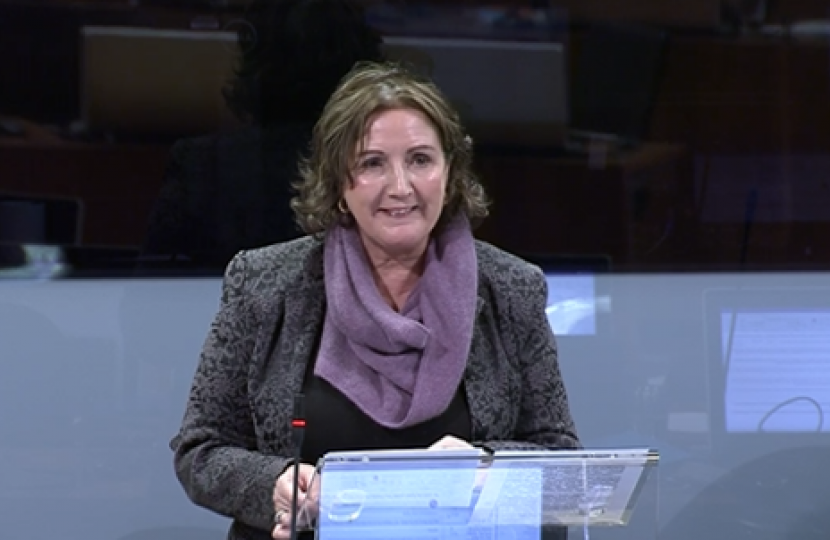 I would like to thank Plaid Cymru for proposing this debate, which, once again, reiterates the issues facing families that were raised in the Welsh Conservative debate on local communities earlier. Speaking to the Welsh Government's amendment, it is, unfortunately, predictable that, once again, it has tried to shift the blame for its own failure to reduce inequality in Wales, instead rehearsing its own tired argument of austerity, rather than taking responsibility for its own actions.

The fact is, Wales has had a Labour Government in power since 1999, arguably propped up in the past also by Plaid Cymru. But, what progress has been made? A recent report from the Joseph Rowntree Foundation shows that, of the four countries of the UK, Wales has consistently had the highest poverty rate for the past 20 years. Even before the financial crash, figures show that Wales had the highest child-poverty levels in the UK: 29 per cent in 2007 and 32 per cent in 2008. Meanwhile, End Child Poverty show that Wales was the only nation in the UK to see a rise in the level of child poverty, with 29.3 per cent of children living in poverty in 2017-18.

Almost £500 million was spent on Communities First, yet the Bevan Foundation found that it did not reduce the headline rates of poverty in the vast majority of communities, still less in Wales as a whole. The October 2018 Bevan Foundation briefing on poverty in Wales reported that Wales had the highest population of individuals in poverty before housing costs in the UK. Between 2014 and 2017, the proportion of working-age adults in poverty in Wales was higher than in any other UK nation, and the pensioner-poverty rate in Wales was far higher than in the other UK nations. This, of course, has been compounded by Wales having the lowest wages and highest level of non-permanent employment contracts across Great Britain.

I'm very grateful. Thank you. I don't disagree with what you said, but would you also acknowledge the impact of the benefit changes, as Adam Price outlined in his speech? And can I ask you, as a person who I know is a principled Conservative, to go back to your fellow Conservative Members in London and ask them to get rid of the two-child rule, what we call the 'rape clause'? It's appallingly cruel. Whatever we think about the parents' behaviour, that third child is not responsible for the fact that it was born into a poor family. Can I please ask you to do that? Because I actually believe you do care about this, but I think many of your colleagues in London do not understand the impact of that terrible rule. For a woman to have to claim that she was raped by her husband to be able to get money for her third child is surely something with which you, personally, cannot agree?

Whilst Plaid Cymru's motion adds a more constructive tone to this debate, it is difficult to scrutinise the proposals, its costings and the evidence base used. However, simply providing more money does not always provide actual long-term benefits to people's lives. Whilst income plays an important role in preventing poverty, the Policy Exchange think tank suggests that, by focusing on welfare and income transfers, we are treating the symptoms of the issue rather than addressing the deeper causes of low income and poverty, including: unemployment, poor standards of education, a lack of skills and social issues such as substance misuse. Tackling these issues requires a more community-focused response from Government.

The Welsh Conservatives have consistently called for the co-production of local services to empower local communities and to create an enabling state. This was argued passionately by Mark Isherwood in the previous debate and there are some positive examples of this in Wales. Oxfam's sustainable livelihoods approach aims to improve the lives of those experiencing poverty and disadvantage, focusing on a participatory approach based on the recognition that all people have assets that can be developed to help them improve their lives. Oxfam have worked in partnership with the Department for Work and Pensions to embed the SLA within the DWP in Wales by providing training for staff, with 50 per cent of trained staff sampled having increased levels of user satisfaction or reporting better service user outcomes.

The Welsh Conservatives recognise the importance of investing in the people of Wales to help tackle the injustices facing communities. We would establish a seaside town fund and market town fund to tackle deprivation within our towns, enabling communities to better fund the services local people need. We would focus on investing in people's skills to enable them to access more skilled, well-paid jobs—putting an extra £20 million into further education—and we would also fund more high-quality childcare to enable parents to take up employment opportunities to support their family.

Meanwhile, the UK Conservative Government is protecting the incomes of hard-working families and will raise the national insurance threshold to £9,500 and increase the living wage by 6.2 per cent from April 2020. It is a Conservative Government that is putting more money into people's pockets. This debate has provided a welcome opportunity to discuss some of the issues facing families across Wales, such as low incomes and poverty.

However, if we are to tackle these issues then we must focus on long-term outcomes, rather than short-term inputs, and empowering individuals and communities to co-design local services that meet their needs. Thanks to Plaid Cymru for your debate today.