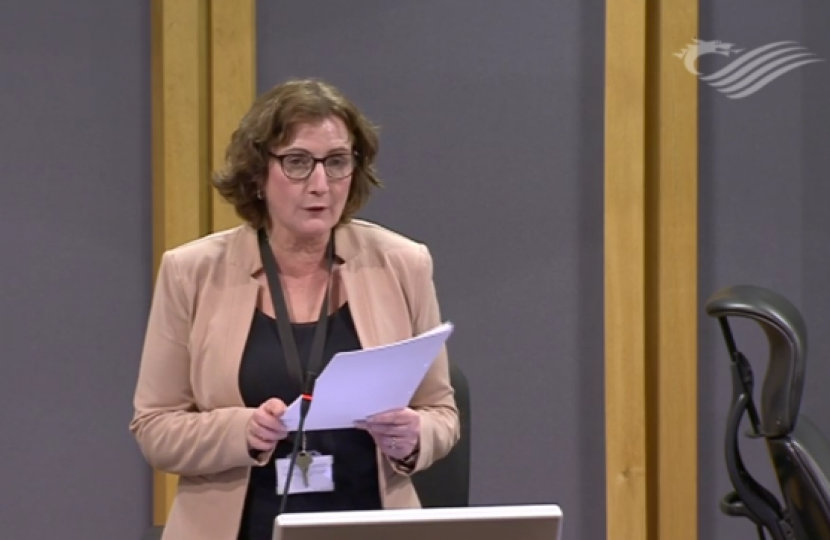 Thank you. I call on Janet Finch-Saunders to move amendments 2, 3, 5 and 6 tabled in the name of Paul Davies.

Delete point 2, and replace with:

Recognises Welsh Conservative proposals, which called on the Welsh Government to place a binding limit on senior office holder salaries to ensure that local authorities enforce effective caps on pay.

Delete Point 3 and replace with:

Calls on the Welsh Government to consider legislation introduced in other Commonwealth jurisdictions, which has enshrined the responsibilities of local government chief executives in law, such as Section 94 A of the Australian Local Government Act 1989.

Add as a new point at the end of the motion:

Notes the evidence heard by the Public Accounts Committee, which saw stakeholders call for a correlation between senior management pay and organisational performance, as a key indicator in providing value for money.

Thank you. I would like to move the amendments tabled in the name of Paul Davies AM. Those amendments state quite clearly,

‘Delete point 2, and replace with:

‘Recognises Welsh Conservative proposals, which called on the Welsh Government to place a binding limit on senior office holder salaries to ensure that local authorities enforce effective caps on pay.’

‘Delete Point 3 and replace with:

‘Calls on the Welsh Government to consider legislation introduced in other Commonwealth jurisdictions, which has enshrined the responsibilities of local government chief executives in law, such as Section 94 A of the Australian Local Government Act 1989.’

Now, we welcome this debate from Plaid Cymru, but with some bemusement, really, because many will remember the local democracy (Wales) Act in 2003, to which amendment 2 refers. At Stage 2, it was the Welsh Conservatives who, with the first group of amendments, were calling for the consent of Welsh Ministers to be given prior to a local authority paying a salary to any officer higher than the recommendation of Independent Remuneration Panel for Wales. This was opposed quite clearly by Plaid Cymru, as well as Labour and the Liberal Democrats. Then, at Stage 3, we tabled an amendment calling for the panel to recommend a maximum amount to be paid to any senior officer by a local authority. Again, this was opposed by Plaid Cymru, Labour and the Liberal Democrats, so it’s interesting—

Will you take an intervention?

Well, there used to be the joint negotiating committee, which set the limit. The Conservative Government in Westminster did away with it. Do you regret that?

Yes, but I’m here in the Senedd, and I’m on about what the Welsh Labour Government and Plaid Cymru—how you have failed in this.

In 2015, the chief executive of Gwynedd county council was paid £306,000, and my colleague Neil McEvoy there raised the differential between local chief executives and the Prime Minister. Yet £306,000 was paid here and, to the director of environment at Blaenau Gwent—eye-watering or what—£295,000. Yes, definitely, you were right to compare that with the salary of our hard-working UK Prime Minister. There is no correlation whatsoever. You were very right earlier to make the point about how, in addition to this, some chief executives, including my own in Conwy, actually receive a salary of over £20,000 for being the electoral returning officer. That actually needs to be addressed, I believe, by the Minister.

Performance management and the chief executive appraisal procedures must be better implemented and monitored appropriately. Evidence taken by the Public Accounts Committee, ahead of their report into senior management pay last term, demonstrated cross-stakeholder calls—many of them—for this, alongside the acknowledgement that local authorities need to do much better in terms of performance management. How often have we seen what I call the revolving-door process where a head of service will actually leave an organisation with a really fine redundancy amount and then actually enter the same local authority again under another guise in another role? It’s quite wrong.

In 2014-15, Welsh councils spent over £100 million on redundancy pay-outs for staff. That was up 46 per cent on the previous year. The Westminster Committee on Standards in Public Life recently recommended that policies and procedures should be in place to manage revolving-door situations where individuals come from or go to the regulated sector, and that these should apply to all individuals at any level of any organisation. Regulators should be transparent about post-employment destinations and restrictions on departing board members and senior executives in the public sector. The reason I’m smiling is that we see so much Labour cronyism in Wales with many of the jobs that go to many within our public bodies, and it’s wrong.

In light of moving towards local government reform, and with the potential for voluntary mergers on the table once more, it is pertinent to note that the society of local chief execs and senior managers have highlighted local authorities in England that have started to share chief executives. Cabinet Secretary, now, with local reform on the table, where there seems to be an intention for you to retain all 22 local authorities, is it going to be 22 chief executives and 22 heads of service on extortionate eye-watering salaries? If you could address those, I think many people outside the Senedd will actually be very grateful. Thank you.