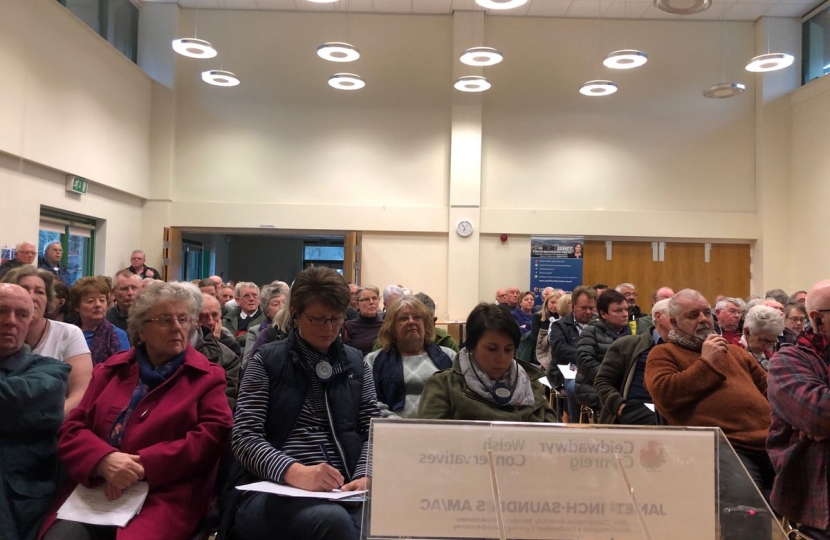 After devastating floods in communities across Aberconwy on Saturday 16 March 2019, Janet Finch-Saunders, Assembly Member for Aberconwy, was pleased to hold a public meeting where residents joined with her to share their experiences and ideas as to how the negative impact of flooding might be mitigated in future.

“I would like to thank everyone who attended and for sharing their local knowledge and ideas.

“Some serious issues were identified, including

“Clearly, there are issues from mountain top to estuary – meaning that consideration needs to be given not only to the Conwy River, but all tributaries, and drains.

“Common sense ideas have come forward, such as Natural Resources Wales, Conwy County Borough Council, and Welsh Water, doing more to ensure that drains, culverts, and streams are not blocked.

“The idea of dredging the river was very popular too, and a matter which would seem to be most helpful at locations such as by Dolgarrog bridge.

“Interesting suggestions were made about the Conwy Valley Railway, and how the restoration of this by Parc yr Eryr might benefit from the tracks being built on stilts or above pipes so to help tackle the trouble caused by trapped water.

“There was also talk about the possible advantages of rewetting uplands, and widening the Conwy River such as by considering the relocation of the some of the embankments between Llanrwst and Tal y Cafn.

“As was agreed at the meeting, I shall be writing to the relevant authorities, including the Welsh Government, so to request a comprehensive review.  More so, it was the majority view at the meeting that this has to be an independent one as it is felt inappropriate for NRW, in effect, to be asked to mark their own home work”.

Welsh Government out of touch with local flooding concerns