Questions to the Minister for Health and Social Services: The Conservative spokesperson, Janet Finch-Saunders (3/5/19) 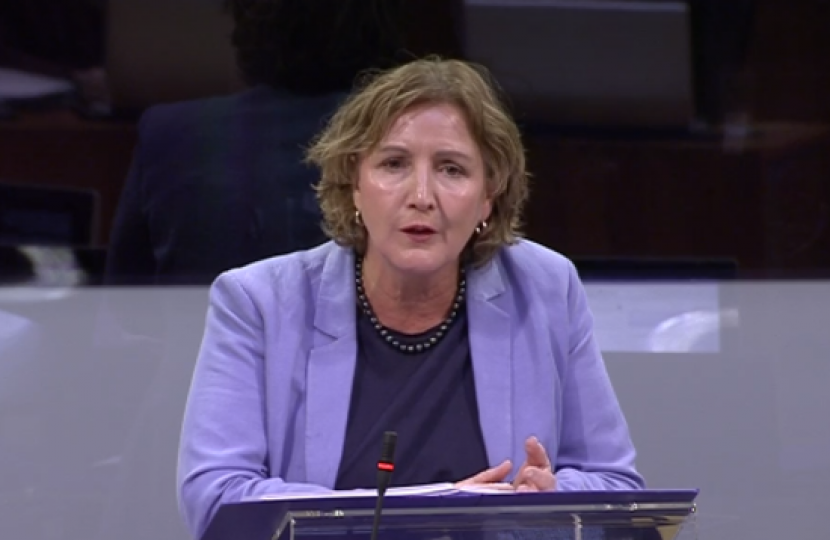 It is widely known among stakeholders, users, politicians in Wales that social care funding across Wales is considered to be very serious. Alongside the 2019-20 local government settlement, providing councils with nothing but real-terms cuts once again, leaving them with little choice but to cut vital services, Wales is likely to have a 35 per cent increase in population over the age of 65 by 2039. The additional pressure on local authorities has been noted by the Welsh Local Government Association, who have estimated that there will be £344 million-worth of service pressures in social care by 2021-2. Clearly—[Interruption.] Allow the Minister, if he can, to respond to me. Clearly, a realistic vision is required, rather than the current rhetoric so often heard in this Chamber. The introduction of a transformative reform package is a necessity, and one that frees up local authorities from the continual, significant and ever-increasing financial burden. The provision of appropriate social care for our most vulnerable in Wales is not only an entitlement, it is a basic human right. Will you, as the portfolio holder and Minister, acknowledge the fact that local authorities across Wales are massively under-resourced by your department, by your Government, financially to provide social care? And will you look at transforming how this is funded?

Vaughan Gething AM, Minister for Health and Social Services:

Well, Llywydd, the questioner shows a staggering lack of self-awareness in asking the question. The unavoidable reality is that the Welsh Government has suffered a 7 per cent real-term reduction in our budget—well over £1 billion—and that has consequences that are unavoidable and directly flow from the policy of austerity implemented by the Government that you support, a policy that you have campaigned for in three successive general elections.

I should also point out that if all of the spending demands made by Conservatives in this Chamber, and outside it, were acceded to, then we would have a much larger sum of money because we simply cannot meet all of the demands you make upon us. They are wholly unrealistic, as well as ignoring the impact of Conservative austerity. When you talk about the challenges of local government and paying for care, the biggest challenge they face is austerity. If you want to see a change in the position of local government and their funding, you should join with others in this Chamber and outside and call on the Conservative Government to end the policy on austerity to stop the damage being done in each and every one of our communities. I think many people will hear what you have had to say and wonder if at all you understand what is happening, or that if you do, whether you're potentially just a touch hypocritical.

I thought we were in for a kinder politics, actually. I haven't insulted you personally.

Now, one recent idea as to how to fund social care is the proposal this week that has been outlined by the Rt Hon Damian Green MP in his paper on fixing the care crisis. It's fair to say that the UK Government realise that it's a ticking time bomb where social care pressures are and they are prepared to do something about it. Now, this would see a pension-style system introduced, guaranteeing a reasonable universal safety net. I'm not endorsing this at this point, but what I'm saying is that they are looking at it and coming up with meaningful and potential ways to address the issue. The way you smile, you look as if you don't even believe that there's a social care funding crisis in Wales. Now, this would help increase the flow of private funding into the—. [Interruption.] You can heckle and try and support him from the sidelines—

Thank you. Just for the reference, £1.20 is spent on public services in Wales—provided by the UK Government—for every £1 in England. So, there's an obvious fault there, isn't there, when, clearly, there's less money being spent in England, and—[Inaudible.]—delivery? But, anyway, on with my question. This would encourage a greater voluntary contribution of the around £163 billion in non-pension assets possessed by each annual cohort of 65-year-olds in Great Britain. Now, the merits of the proposal may be a debate for another day, but at least, as I've said, they're looking at it. But we must acknowledge that something has to be done in Wales. Can you say yourself that the Welsh Government, and you as a Minister, are doing enough to do this, and will you also confirm to me how you have taken forward one, two or even more of the nine recommendations of the Finance Committee report, 'The cost of caring for an ageing population', especially No. 7, which highlights the need to engage with the public about the future funding of social care in Wales, and to have a national conversation? Have you taken those recommendations forward, and are you prepared to have that national conversation?

Well, I'd like to thank the Member for her latest interesting take and bring her back to reality. The undeniable challenges on social care exist right across the United Kingdom, including here in Wales. Within the significant reductions made to our budget by the UK Conservative Government that she supports and has campaigned for, we have made honest choices about the share in resources between health, local government and all other public services and money we spend on supporting the economy. If the Conservatives in the United Kingdom Government were really serious about fixing this issue, they would have done something about it. We've been promised a Green Paper, not a paper by Damian Green, to understand what the UK Government are going to do on this. It has been delayed again and again and again.

The Dilnot commission that was supposed to help take this matter forward was buried by the Conservative Government in the last term. The reality is we could have made more progress right across the United Kingdom if the UK Government had been a straight and honest dealer in this and actually taken action rather than kicking the can down the road. Here in Wales, we do have an inter-ministerial group that I chair on looking at the future payment for social care, and looking at how we generate more money to go into our social care system. And that is not a consequence of free choice to make at all, and if we want more resources to go in, there are difficult choices about where that money comes from and if we're prepared to fund that in a variety of different ways.

I suggest that rather than just looking at it, the UK Government needs to recognise that they are responsible for the position on social care funding, and it comes back again to the choice on austerity. End austerity—there are different choices that every Government within the United Kingdom can make. End austerity, and your Conservative colleagues who run councils in England will have a different settlement, because don't take my word for it, but the choices that your Government across the United Kingdom has made have had even more serious consequences in England than any other part of the UK. They look on the way Welsh local government has been treated and they recognise there is a much better deal available for local government here because there is a Welsh Labour Government that has balanced our resources and prioritised local services.

There are 370,000 carers in Wales providing 96 per cent of the care in communities across Wales and they contribute more than £8.1 billion to the Welsh economy every year. Now, if just a small percentage of these hard-working carers stopped caring, health and social care services would undoubtedly submerge into a deeper crisis than I have mentioned. Therefore, challenges faced by unpaid carers in Wales must be addressed by you. For example, I am shocked, and I am sure other Members here would be, to learn—

Many carers are unable to access appropriate breaks from their caring responsibilities in order for themselves to live healthy and fulfilling lives and to reach their own potential in terms of education and employment. What urgent steps are you taking to ensure that all carers receive the adequate breaks they require and that the full cost of replacement of respite care in order for them to live their own fulfilled lives is achieved?

Thank you for the question on carers—an important subject on which there is some cross-party agreement that we need to find a better deal on. The Social Services and Well-being (Wales) Act 2014 provides rights that do not exist in other parts of the United Kingdom. Our challenge is how we work with our partners and make sure those rights are realised. There is no lack of focus on carers and, indeed, the Deputy Minister is leading work with carers on implementing a better deal for them here in Wales.

I actually think the problem with this set of questions is that when you talk about powers, levers and resources that already exist, actually the undeniable truth is we have only recently had powers over changing our income. We have not had the resources. That's a point I've continually made about austerity and your failure to take any kind of responsibility for the choice that you have actively campaigned for in three successive general elections. It is a Conservative choice, it is a Conservative creation—the crisis that we see across public services right across the United Kingdom.

The challenge in this exchange is that, unfortunately, Llywydd, I just don't think the Member understands what is actually happening within the country, and let's just leave it at that.