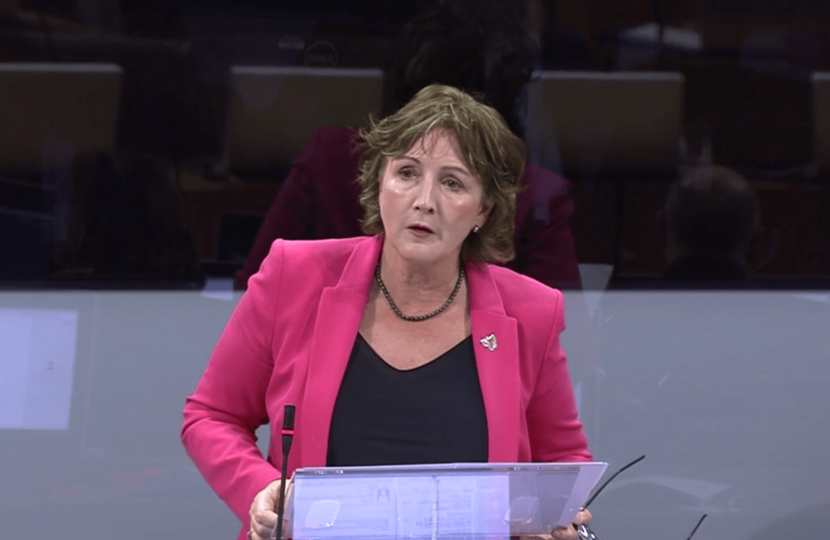 Diolch, Llywydd. Minister, I'm sure that you are as horrified as I am to learn of the horrific failings and incidences of alleged abuse and neglect at the Pines residential home in Gwynedd. From the footage that has come to light at this home, there is apparent evidence of falsifying documents, medications hidden in residents' food, unsafe methods of moving residents and an overall lack of dignity and respect in their treatment and care. These are all incidences that fall well below what is expected within Wales and its own care regulations, all highlighted as a result of some investigative journalism shown last night on the Y Byd ar Bedwar S4C programme that I watched. What concerns me, Minister, is that this residential facility was already known to Care Inspectorate Wales and had a number of critical reports against its conduct and treatment of residents, but the poor treatment of its vulnerable adults has clearly continued. What is your Government doing alongside CIW to ensure that any facilities, such as the Pines residential home, are put on strict, meaningful improvement programmes, to ensure that the vulnerable residents are safeguarded against any malpractice or neglect?

Thank you for the question, and yes, I've seen the programme Y Byd ar Bedwar, and we're very aware of the concerns that have been raised regarding the Pines in Criccieth, as is the care inspectorate. The inspectorate took immediate action on being made aware of those issues identified by S4C at the Pines, and its inspection is ongoing as we speak. Now, because of that, it's difficult for me to comment any further about the Pines itself at the moment, but you do rightly point out that, actually, there have been improvement plans and inspections previously that have led to improvement measures within this home. It’s right that the inspectorate is in there right now investigating the latest allegations, as they remain at the moment—allegations—and to see what needs to be done. But it is difficult for me to comment further on the Pines.

What I can say as well, though, is that the care inspectorate carried out over 600 inspections as part of its regular inspection and regulation regime last year, but, of course, it’s always able, on the reporting of any incidents of possible abuse, neglect or whatever, to actually go into a home at a moment’s notice, and that’s what it's done in this respect.

You asked also what can the Welsh Government do further? I think that there are things that we can do and that we are doing. Only a couple of years ago, this Assembly took forward the Regulation and Inspection of Social Care (Wales) Act 2016. That is significantly different, because, for example, that places quite firmly, within law, requirements on providers and designated responsible individuals for care homes so we know where the buck stops as well. But it also moves away from minimum standards of provision, which, if you have a minimum standard, people choose to meet the minimum standard and no more, and it focuses instead on continual improvement, which is what we want to get from all our care home settings. But it also places an emphasis on the importance of the individual—on their care, their support and on supporting them in what their needs are. We won't get there overnight on this, but this is what the Welsh Government can do: set the framework for both the regulator and for care homes to constantly drive improvement.

Thank you. It is vital, however, that any suggestions for improvement, whatever their nature, are taken seriously and that the well-being of vulnerable older people is at the heart of how care is delivered. But my concerns do not just relate to the rights of people within residential homes. As the Welsh Government pursue their 'A Healthier Wales' agenda, which sees more patients receiving care at home, how are you making arrangements to ensure that older people who are receiving care in their own homes can be safe and that they will receive the highest standard of care and that their well-being is supported by all members of the multidisciplinary team responsible for providing that care? The reason I ask that today is that, on Monday, I was shocked by the fact that one of my constituents has recently been very badly let down by the multidisciplinary team that are going into their home at the moment, which has led to their daughter asking for a thorough investigation to what they deem the neglect of their elderly father.

So, what regulations and inspectorate systems will be put in place to ensure that vulnerable adults are not neglected in their own homes? They are some of the most vulnerable members of our society and it is vital that we have an independent inspectorate body in place to visit people in their own homes and ensure that all their needs are being met and their rights respected. What work is taking place, Minister, to ensure that such a system is developed, as your Welsh Government, health boards and social services progress with a community care agenda?

I think, Janet, that there are a number of things that we can do. In fact, when Sarah Rochira left post back in June, I think it was, we stood here in the Senedd and we made that commitment to actually making rights real for older people and we laid out a number of the ways in which we would do that. You’re right in saying this is not simply to do with the care setting: it’s every setting that a person will be in—in their own home, close to home, in a care setting—that makes them have a good quality of life and shows that their rights are respected.

So, some of the practical things that we said: our legislative framework there is underpinned by the Social Services and Well-being (Wales) Act 2016. We said that we would, with the new commissioner, Heléna Herklots, co-produce practical guidance that demonstrates how to make those UN principles real for older people. We would take some of our initial work and focus it on the commissioning of services for older people, on safeguarding in all environments and on advocacy, because these are areas we need to get right if we’re going to support all older people to have voice and control over their health and social care in whatever setting.

But we’re also going to do things within the care home setting as well. So, we will update the 2009 guidance—it’s been too long since we’ve looked at that—in terms of how we escalate concerns about care within care homes. We will take advice from the NHS centre for equality and human rights on how to embed human rights into NHS practice. We will, with Care Inspectorate Wales, build a narrative of human rights into care home inspection reports, in light of the earlier question, and many other aspects. One thing we said we would do with the new commissioner is to ask her to chair a working group for us on making those rights real, because it isn't simply about passing legislation, it's about making them bite.

Thank you, again. I've met with Heléna Herklots and I was very impressed. I know, going forward, she can't do everything, but one of the things she's going to focus on is elder abuse. The Welsh Conservatives have had long-standing commitments to ensure that the rights of older people in Wales are strengthened, and I am hugely supportive of my own colleague Darren Millar AM who is now bringing forward much needed legislation in this area. We know, Minister, that older people do not always know their rights, they do not always know when an injustice has been committed against them, and they do not always have the confidence to report this. This was most recently evidenced by the Crown Prosecution Service, which revealed that of the 35,000 crimes prosecuted in Wales last year just 250 were against the elderly. It is clear that we need to make a concerted effort to ensure that the rights of older people in Wales are strengthened, that older people know their rights, and public bodies have a duty to promote and to protect these. Can you today acknowledge that there is scope in this area to strengthen this with legislation and that you will work constructively with the proposed Bill, and, of course, those putting it through, to strengthen the rights of our older people here in Wales?

The first thing to say in response is that all rights—older people's, children's rights, the rights of disabled people—are universal and they should be applied in that way. The other thing is I think there is cross-party support for driving the rights agenda as well. I think the question is how we best do that. I'm more than happy to work constructively with Darren and any Member who brings forward suggestions on a rights-based agenda to see whether legislation is the right way forward or whether there are alternative ways. I don't say that latter part of my sentence to row away from, but I think that making rights real is far more than only legislation. That's where, working with commissioners, we can draw out very practical ways for when we talk about older people in care homes, older people who have social care packages in their own homes and so on.

What strikes me is that if I go to a school in Swansea and I ask children about rights, they can articulate to me by the number what those rights are. They can tell me about right 31, the right to play. They can tell me about article 12, the right to be heard and to have grown-ups actually put their ideas in a process. But, if you go to an older person's group and say, 'Do you realise you have rights?', they'll say, 'Really?' So, we've got a way to go.

I'm more than happy to engage constructively on that, because I think we share the same aim. I would simply say in reciprocation, let's engage with it practically on what would be needed to actually make those rights real and make older people aware of the rights that they have, which are universal.