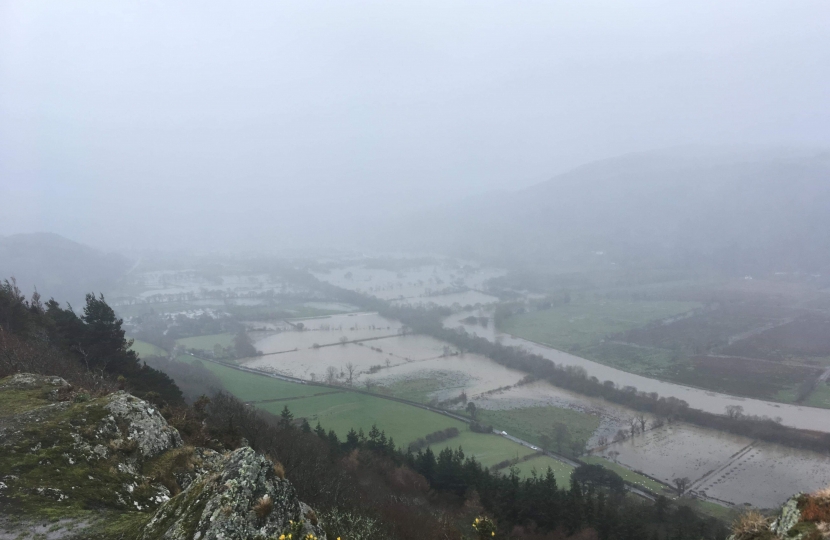 The Welsh Conservatives’ Shadow Minister for Climate Change, Energy and Rural Affairs – Janet Finch-Saunders MS – has today (17 July) published her latest report on her work to help address serious concerns about flooding in the Conwy Valley.

Earlier this year, Storm Ciara caused chaos across Conwy. Approximately 60 properties were flooded in Llanrwst, 10 in Betws y Coed, and many others in outlying areas. An extension to the deadline for residents to apply for the flood funding grant was secured in March, following a successful campaign by Mrs Finch-Saunders.

Speaking of the situation faced by residents, Janet said:

“I am pleased to publish my latest report into the damage caused by recent major flooding incidents and the progress seen so far. The report details the responses received to over forty different concerns that I have raised and been working on unceasingly.

“These instances of flooding are happening far too often, making plain the true threat of climate change to the towns and villages of North Wales. As I have said before, the Welsh Government must urgently carry out an independent review of local flood mitigation measures to ensure community safety.

“An independent review would also work to force Mark Drakeford’s administration to finally shift their approach to this threat from reactive to preventative. I urge all local residents to sign my petition to force action on this important issue.

“In the meantime, I am pleased to be securing positive progress for the Conwy Valley.

“Actions secured for Llanrwst include all culverts and critical locations being assessed, grant funding to upsize the capacity of the culvert at Bron Derw, and emergency works at Perthi and Y Berllan.

“My constituents and I have been clear that a whole catchment approach is needed, and I have seen progress on that. For example, Natural Resources Wales are about to institute a viability study of local defences, RWE is currently undertaking a study to better understand the viability of the proposal to increase the capacity of Eigiau, and further restoration of peat bogs is on the agenda.

“I have many other projects underway and would like to thank every individual and organisation who are cooperating with me for the best interest of Llanrwst and Aberconwy”.