Statement by the Deputy Minister for Health and Social Services: Improving Outcomes for Looked-after Children (2/7/19) 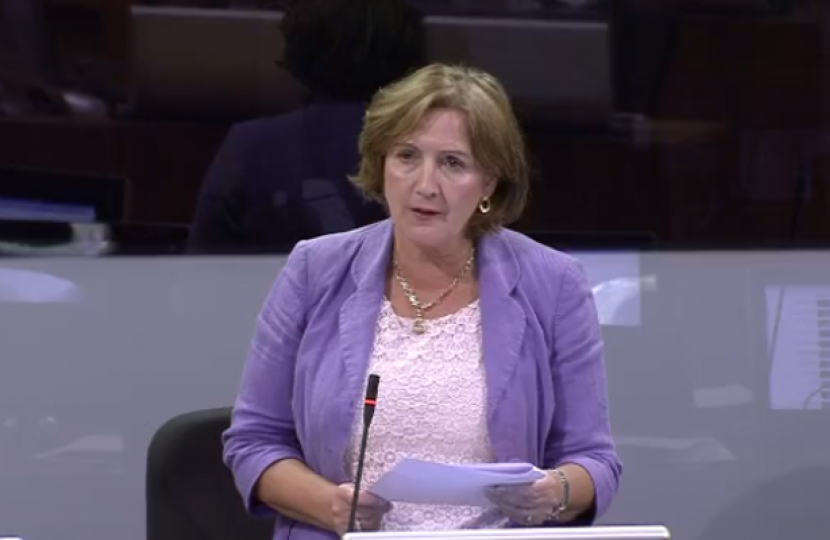 Thank you very much, Deputy Presiding Officer. Our vision for children's services is clearly set out in our programme for government, 'Taking Wales Forward', and our national strategy, 'Prosperity for All'. I believe there is a strong cross-party consensus amongst Members of this Chamber that we all have collective responsibility to ensure that care-experienced children are provided with the best care and support available to allow them to flourish in a safe environment and to enjoy the same opportunities as any other child would expect.

Latest statistics show that, at 31 March 2018, there were 6,405 looked-after children in Wales. Over the last 15 years, we've seen the number of looked-after children in Wales increase by 34 per cent. A recent report from the Wales Centre for Public Policy notes that this rise cannot be attributed to austerity alone. The rate of looked-after children per 10,000 population in Wales is 102. However, there is significant variation across Welsh authorities, ranging from 50 per 10,000 population at the lowest, to 191 per 10,000 population at the highest, and, although deprivation is an important factor in this variation, there are also variations in practice. This variation between areas and the general upward trajectory is unsustainable, and local authorities themselves have acknowledged the pressure being placed on children's services and the family courts.

Almost 25 per cent of looked-after children are placed out of county and 5 per cent are placed outside Wales. While there'll often be good reasons for them to be placed out of the area—for example, the need for specialist placements or with wider families and friends—we want to explore as to whether a proportion of these children could be placed more appropriately closer to home. Proposed reduction expectations will span the course of three years, with regular evaluation and monitoring, both quarterly and at the end of each year.

I acknowledge that this is a challenging agenda. However, given the pressures being placed on local authorities and the family courts in an era of dwindling resources, we must take action that will help safely reduce the number of looked-after children in Wales, enabling resources to be re-invested in prevention and in supporting positive outcomes for care-experienced children in Wales. I've been absolutely clear that, if we take a safety-first approach here in Wales, nothing overrides the need to protect children from abuse or neglect. And I've committed to work co-productively with local authorities to develop reduction expectations that are bespoke to each local authority, tailored to their populations and demography.

This approach has been welcomed by the Wales Local Government Association and the Association of Directors of Social Services Cymru, who have committed to work with us on this agenda. Working co-productively, a technical group was established, with senior representatives from local government and the third sector. A conversation framework and reporting template was developed ahead of a visit by a small looked-after children engagement team to each of the 22 local authorities in Wales. The framework helped set the agenda and ensure a consistent discussion was had in each local authority, focusing on how they manage their service, their approach to risk, and management of entrance and exits from care. All 22 visits were completed in April and May. The engagement team were very impressed by the scale of work being undertaken throughout Wales to support children and families and to avoid the need for statutory intervention, and discussions held with local authorities were well received.

Conversations focused on the need for collective responsibility for children’s services at a corporate level to support improved outcomes for children. Local authorities were encouraged to demonstrate how they manage the business of children’s services, including information about the practice framework they operate, data about the services provided to children and families, performance monitoring and tracking. Local authorities were encouraged to be aspirational and ambitious in developing their reduction expectation plans. A clear message was given of the need for action to rebalance the system, focusing on prevention and early intervention to support the best interests of children and families. As the officials went around Wales, concerns were raised about potential consequences of not meeting expectations. Local authorities were reassured that penalties were not being considered.

There are clear consequences of not taking action, however. Whilst official statistics on the numbers of looked-after children will not be available for 2018-19 until November, local authorities reported early figures, as of March 2019, which show another potential increase in the number of looked-after children of around 470, leading to a rate of 109 per 10,000 population. To compare this with other UK nations, in Northern Ireland, for example, the rate is much lower, at 71 per 10,000, despite it being more deprived overall than Wales. Based on existing trends, if we were not to take any action, numbers will continue to increase by an average of 6 per cent per year.

Following the visits, all local authorities returned reduction expectation plans by 31 May. Sixteen local authorities have set targets to reduce their looked-after population, representing an average reduction of 4 per cent in each of the next three years. Conversations are under way with those authorities that have yet to commit to reductions. Further visits were being planned to support those authorities in the development of their reduction expectations. Clarification is also required on the plans submitted for out of county, out of Wales and children removed from parents with a learning disability. Whilst local authorities have told us that children are being appropriately placed, authorities are being encouraged to demonstrate their plans for bringing children closer to home.

Local authorities have consistently highlighted that the judiciary, the Children and Family Court Advisory and Support Service Cymru and health boards also have a key role in supporting reduction expectation plans. We are concerned, for example, that the number of children placed with parents under a care order has increased significantly over the last three years. Further work will be undertaken with the judiciary and CAFCASS Cymru to understand a perceived reluctance in the use of supervision orders, section 76 and the application of the no order principle.

Local authorities and key partners will be invited to a national learning and peer support event in October to learn about the key messages from this work. Local authorities will be encouraged to work together and share best practice that will help reduce the variance in numbers across Wales. This exercise is aligned with the activity continuing under the Improving Outcomes for Children programme and its ministerial advisory group, ably and successfully chaired by David Melding AM, particularly the focus of work stream 1, around prevention and early intervention and safely reducing the need for care. Together, this demonstrates our firm commitment to rebalancing the looked-after children system so that the right support can be provided to enable families to support their own children, and outcomes for those children in care are maximised.

I thank the Deputy Minister for the statement, and also to confirm belief that, you're quite right, there is strong cross-party consensus amongst Members of this Chamber that we all have a collective responsibility to ensure that care that children experience is actually of the best quality. However, you have the levers of power, so it was with significant interest that I read your statement. Urgent measures are needed, because Wales has seen a 34 per cent increase in the number of looked-after children over the past 15 years. In 2017, 23 care and support plans were put in place by children's services every single day. On average, a child or a young person was brought into the care system in Wales every four hours. So, as I'm sure you will agree, it is alarming that the number of looked-after children in Wales has reached a rate of 109 per 10,000 population here, falling behind other UK nations.

So, question 1. Twenty-five per cent of children are placed out of county, and 5 per cent outside of Wales. Now, you have stated that you want to explore whether a proportion of these could be placed closer to home. So, therefore, will you clarify what steps you are taking to achieve this, and will you set a target and a time frame, so that we see a reduction in numbers?

Question 2. You have committed to working with local authorities to develop reduction expectations, tailored to their populations and demography. However, only 16 authorities out of the 22 have set targets to reduce their looked-after population. So, I suppose the question is: why is this, and when should we expect to see targets set for the other six local authorities? As I hope you will agree, we need to see all councils working towards reduction, and if there is no target, I am left wondering how successful the reduction expectation plans will be.

And my final question, Deputy Minister. We know that local authorities are key to addressing the looked-after-child crisis here in Wales. Social services departments are under huge financial pressures. For example, last week, it was reported that Ynys Môn council children's services department overspent its 2018-19 budget by £1.83 million, largely because of a spike in the number of children taken into care, and then expensive out-of-county placements. Therefore, will you commit to providing extra financial support to our local authorities, who report finance issues being the barrier to reducing the number of looked-after children? And would you clarify to me how many additional children you do expect to come under the remit of the already struggling care system? And also, at a time when we see such a crisis in our looked-after children, and lots of pressures on our social care departments, is there really a case for the defence of reasonable chastisement to be removed?