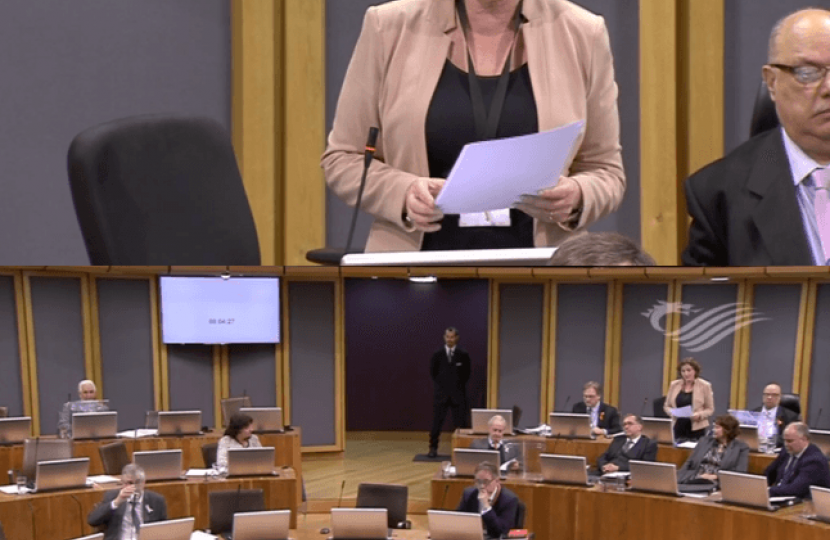 I don’t think I need to tell anyone here that small businesses are indeed the lifeblood of our economy in Wales, making up 99.4 per cent of all businesses in Wales. In 2015-16, the number of SME start-ups rose by 2.1 per cent—that’s 99,860—all small businesses, all out there on their own. Many are sole traders who start off small and they have many competing and conflicting priorities just to be able to keep the shop door open.

We all know of many wonderful examples in our own constituencies, many promoting our local tourism industry—especially our hospitality businesses, our retailers on our high streets and our fantastic services industry. SMEs make up 61 per cent of private-sector employment, providing the equivalent of 673,600 full-time jobs. That’s a colossal amount of people. Many of them do it completely independent of any support from the public sector or, indeed, this Welsh Labour Government.

But, support for SMEs is lacking, particularly in Wales. I’m glad to see that the United Kingdom Government actually do take small businesses very seriously. Here, we’ve seen an increase of just 20 medium-sized businesses since 2014. Yesterday, Barclays published findings showing that the proportion of high-growth SMEs in Wales fell by 2.2 per cent in the last 12 months, the second worst decline in the UK after Scotland and compared to all regions of England, which have seen and witnessed an increase.

The Welsh Government administered just 10 grants a day through Finance Wales—and that’s across the whole of Wales—last year. Professor Dylan Jones-Evans has stated that the funding gap between the finance that Welsh SMEs need and what they can access is £500 million a year. That’s a lot of money, you know, if you’re a small business. The Wales development bank appears to be simply a re-packaged version of Finance Wales. Various proposals for a development bank have been proposed. In fact, we, the Welsh Conservatives, have actually come up with good ideas far better than Finance Wales. Even now, as part of its deal with Plaid Cymru, the Welsh Labour Government is very reluctant to come forward with any detail about the forthcoming Welsh development bank, despite it due to actually be running next year.

For us to make the debate meaningful today, though, the National Assembly for Wales must be able to scrutinise any development bank’s business case in order to ensure that businesses are fully supported through the proposals and that the failings of Finance Wales, which we’re all too familiar with, over many years, are fully addressed. What we are concerned about is that it will be a continuation of Finance Wales, which has long been deemed unfit for purpose and lacking in engagement. Perhaps the Cabinet Secretary might be able to shed more light on this.

The levels of business rate relief in Wales is putting our SMEs at a distinct disadvantage compared to similar business in England and Scotland. The Welsh Government has not supported businesses through the valuation office’s revaluation process, discretionary hardship relief is too often not awarded where needed and a better rate relief is available to SMEs in England and Scotland. For 2017-18, it is estimated that a business with a rateable value of £12,000 will be liable to pay just under £6,000 in business rates in Wales, whilst in England that figure would be zero. A business valued at £10,000 would owe an amount of £3,323. In Scotland, that figure would be zero.

The Federation of Small Businesses has criticised the Welsh Labour Government, and I do too, over their spin on their manifesto pledge for tax cuts to small businesses. Deputy Llywydd, the FSB are correct, making small business rate relief permanent simply does not imply any tax cut whatsoever.

The Welsh Conservatives have long been supporters of our small businesses and we shall continue to be so. We have several proposals to support them: the creation of a small business hub, ensuring our SMEs are truly represented, providing a clear point of contact, improved access to support and easy to navigate; a regional development bank—businesses to access finance on the high street and on their own doorstep; much-improved business rate relief, with rates abolished for all businesses with a rateable value up to £12,000 and tapered for those up to £15,000. Llywydd, I have hoteliers locally paying business rates of around £120,000, retailers paying £70,000 a year far higher than their rents. Llywydd, we welcome a review of business rates, however it’s too little, too late. We call for an immediate cap on the multiplier and take a proactive approach to radically reform our really outdated business rates system in Wales.