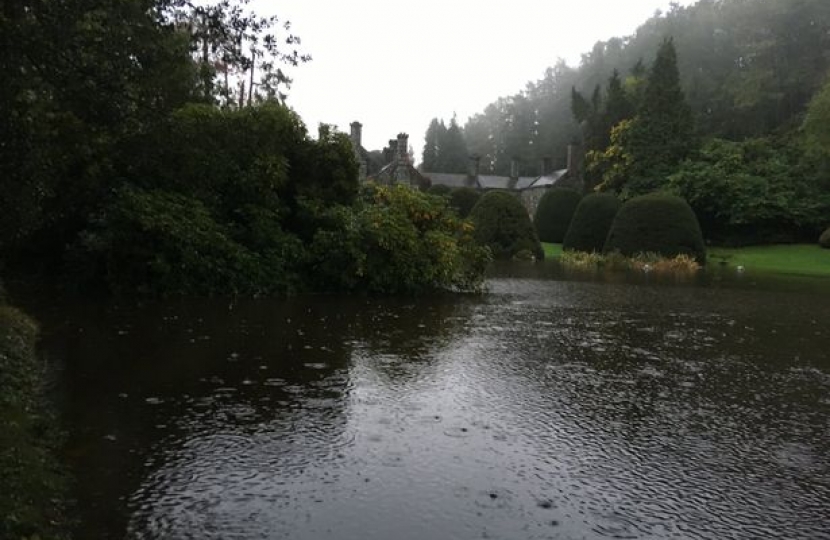 The Welsh Government has said Gwydir Castle does not meet its funding criteria when it comes to flood defences, as "the primary beneficiaries would still be an uninhabited cellar and gardens".

The Grade I listed building and gardens, near Llanrwst in the Conwy Valley, were flooded twice in as many months due to Storms Callum and Bronagh .

The owners of the castle have pleaded with the Welsh Government to provide them with a flood wall but time and time again they've refused.

Due to the ongoing issue, volunteers have started helping out to fill and lay sandbags around the perimeter of the gardens in a bid to minimise damage.

Following the latest case of flooding, Aberconwy Assembly Member Janet Finch-Saunders has become very vocal about the problem and even raised the issue at First Minister's Questions, earlier this week.

She asked: "How are you going to protect this very important, historical, double Grade I listed castle and gardens, and how do you intend to live up to the reputation that you care and value our historical heritage?"

In the absence of First Minister Carwyn Jones , Leader of the House and Chief Whip, Julie James AM responded: "As I'm sure the Member already knows, funding for flood alleviation schemes in Wales is available from the Welsh Government's flood risk management programme. It is directed at the most high-risk communities in Wales where risk to life remains a priority.

"Even if it were possible to design a cost-beneficial flood scheme for Gwydir, the primary beneficiaries would still be an uninhabited cellar and gardens, and even though those features are of huge historical importance and very beloved of the local community, it does not meet the very stringent criteria for funding.

"Cadw 's funding stream for repairs to historic buildings is focused on community assets, and therefore a flood alleviation scheme for Gwydir would not meet the criteria. But it is worth noting that Cadw has already provided grant support of over £150,000 towards restoration works for the castle in previous years.

"I'm bound to say, Llywydd, that this is another example of the Conservative Member asking us to spend a lot of money on something that we all value whilst not taking into account the cuts in our budget from her Government over many years."

The response hasn't gone down well with Mrs Finch-Saunders, who's said the Government should be "ashamed" and called on them to provide the £350,000 needed to build a permanent flood wall.

She said: “The Welsh Government ought to be ashamed of its response, and willingness to sit back and allow this double grade I listed castle and gardens – the only grade I listed gardens in Wales – to be devastated by floods.

“Astonishingly, the fact that Gwydir’s historic gardens are suffering regular harmful flooding, and that the cellars are becoming inundated by up to six feet of water, damaging this ancient Welsh house, is not enough for the Welsh Government to allow the site to meet the criteria for flood alleviation funding.

“The First Minister, at a Carwyn Connect event in Llanrwst in January 2017 stated that a solution needed to be found for Gwydir, and that the flooding could not be allowed to continue.

“I will be pestering him, Lord Ellis-Thomas, and Lesley Griffiths again to come forward with the estimated £350,000 needed for a permanent flood wall.

“Like every individual who has recently freely given their time to help fill sandbags to try and reduce the impact of flooding, I recognise the importance of the castle to Wales and the need for action to be taken to protect it”.