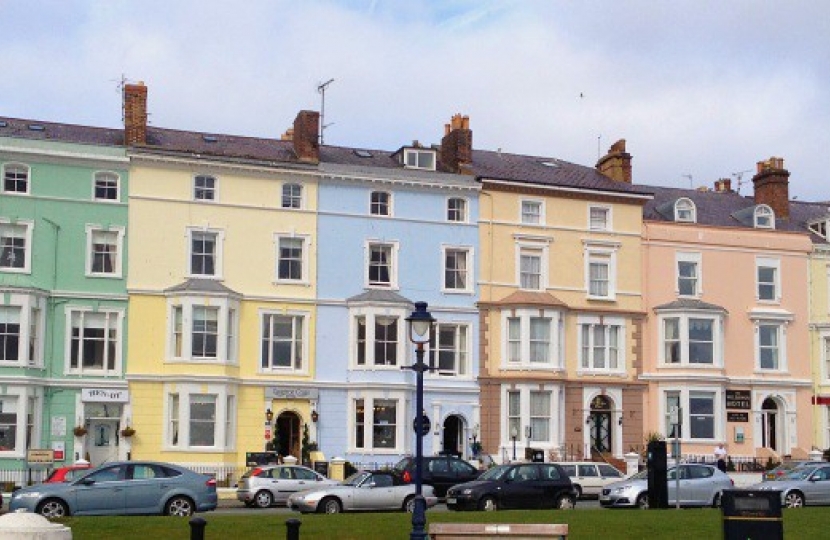 'Winter is coming' - those were the words from a Llandudno hotelier that represents the fears of an entire sector as measures to slow the spread of coronavirus are stepped up.
The industry has already seen bookings collapse and cancellations soar - with reports that Llandudno is at 10% of its normal capacity.

This hit another level yesterday when Prime Minister Boris Johnson advised people not to visit "pubs, clubs and theatres" and avoid unnecessary travel - warnings that could signal the end for many businesses without urgent support.

There is anger in the sector that the UK Government has not asked for their closure which some industry experts say would make it possible to claim insurance for their losses in the coming weeks and months.
Welsh Government is also under pressure to act more rapidly to spell out exactly how it will use additional funding to help companies in Wales.

Some businesses are already closing as they hope to ride out the storm while others like Europe's biggest campsite Shell Island, near Harlech, is putting back its opening date for the season.
Chancellor Rishi Sunak is today set to unveil a raft of additional support and Welsh Government is under pressure to do the same.

Peter Hibbert, who runs The Evans Hotel in Llandudno, said: "It's like they say in the Game of Thrones 'Winter is Coming'.

"We are getting cancellation after cancellation, our demographic is older people, often on coach trips and they are cancelling.
"We are down to about 10% of what we would normally be doing. Llandudno will turn into a ghost town over the next few weeks.
"We have bookings going forward but will they come?
"I have been here a long time and don't owe the bank money so I'm not in the same position as other businesses. I can close and then reopen in a few weeks but what about the staff?
"They have been loyal to me, I don't want to lay people off, but if no one if coming what can I do.
"We need support, we need the Welsh Government to be proactive but they are dragging - we need action now."

UKHospitality CEO Kate Nicholls said: “This is catastrophic for businesses and jobs.
"The government has effectively shut the hospitality industry without any support, and this announcement will lead to thousands of businesses closing their doors for good, and hundreds of thousands of job losses."

CAMRA's National Chairman Nik Antona said: "Pubs are at the heart of many communities and often provide other vital services.
"The advice from the Government for people to avoid pubs will have a devastating effect on the pub and brewing industry, the many millions of people it employs and the huge contribution it makes to local and national economies.
"The lack of decisive instruction from the Government leaves pubs in a limbo where customers will abandon them, but they’ll be unable to claim insurance or other support to help them survive. The Government has not defined how long people should stay away from pubs, but be in no doubt, within a short time many pubs and breweries will close and never reopen to serve their communities."

Aberconwy AM Janet Finch-Saunders, whose constituency includes Llandudno, has been stepping up pressure on Welsh Government to act.
Welsh ministers have announced some action with Development Bank of Wales offering all its business customers a three-month capital repayment holiday.
Economy Minister Ken Skates has launched a conversation with companies about what they need to respond to the outbreak.
They now have a £475m coronavirus funding pot from UK Government for businesses and the NHS and UK Government has announced measures like major extra business rates support for firms in England.

Mrs Finch-Saunders said support in Wales now has to be rapid as businesses are already "hitting rock bottom".
She said: "I know of hotels in the Conwy Valley which, due to flooding, have recorded the worst February on record since foot and mouth, and are now facing serious difficulties due to Covid-19.
“Here in Llandudno, it has been found that future bookings at hotels equate to just 10 per cent of the bookings made at the same time last year, and that queries about cancellations are increasing.
“Tourists spend around £17 million a day whilst in Wales, amounting to around £6.3 billion a year, but it seems that a significant proportion of this may be lost as a result of the virus.
“Without the usual level of customers, businesses are at threat of going into administration, so urgent action is needed this week to help prop them up.
“We know that the hospitality sector is already struggling, so rather than give assurances that the Welsh Government is monitoring the impact and that Visit Wales will continue to undertake research across the sector to understand the effects on businesses, it is time for urgent action on business rates, grant funding, and for the Welsh Government to ensure that the support available here is at least as generous as that in England."

Edward Hiller, managing director at Llandudno landowner Mostyn Estates, said: "Businesses need clarity now from the Welsh Government.
"They can deal with the detail later but they need an announcement now about how the Welsh Government will help them.
"Businesses will be affected and are already being affected. they are worried about survival and they need to know what help they can get."

Clwyd West MP David Jones said: “The Treasury yesterday confirmed additional funding of £475 million for the Welsh Government (WG) to assist it in addressing the coronavirus epidemic.
“At the this worrying time, it is essential that businesses throughout the UK should know that they will have the same level of support.
“England-only measures already announced include the  £500 million hardship fund, a £3000 support grant for businesses qualifying for 100% rate relief and additional business rates relief measures for pubs and other enterprises within the hospitality and leisure sector.
“More announcements are expected imminently.
“The WG must ease pressure on businesses by confirming that they will immediately adopt all measures announced for business support by Westminster.  They have been given the funding, and there is no reason for delay.”

A Welsh Government spokesperson said: “We will be making further announcements about coronavirus support for businesses, including rates relief. Finance Minister Rebecca Evans wrote to the UK Treasury on Friday seeking urgent clarity about the level of rates relief funding it will guarantee(response sent prior to £475m announcement), recognising the greater number of small business in Wales and their specific needs.
“The Minister for Economy, Transport and North Wales, Ken Skates, has just announced the Development Bank of Wales is offering all its business customers a three-month capital repayment holiday to help them manage the financial fallout from the virus.”