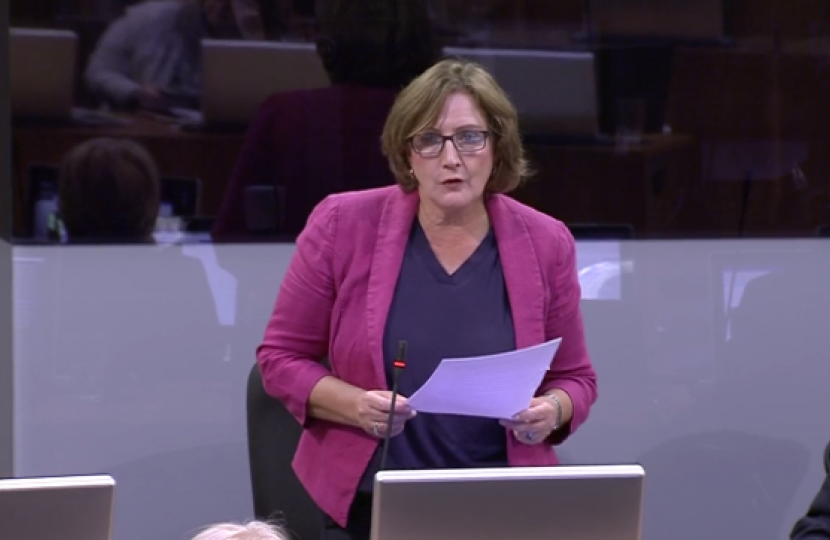 Could I ask for a statement, please, on the massive funding cuts that your Government have imposed on our national parks? The oldest national park in Wales is now under threat. Snowdonia is home to over 26,000, attracting 6 million people annually to enjoy its breathtaking scenery and world-leading attractions. Our unique landscape is a global attraction, and requires careful management to ensure a sustainable future. However, due to the year-on-year funding cuts imposed—they had well over £5.5 million—the budget now, they're looking to cut the authority's budget to just £4.4 million. So, this is going to result in, without a doubt, paths on Snowdon not being repaired; closure of all three information centres; the end of the Sherpa bus, which creates an invaluable link between the six main routes that travel up Snowdon, as well as the main car parks, villages and tourist attractions; closure of public toilets; loss of staff; and serious questions about the financial robustness of the authority. As should already be clear to you, the Welsh Government's financial plan is one of the greatest threats Snowdonia national park has ever seen, and the damage that's going to be imposed is to tourism, and, indeed, the Welsh language. Will you, or the relevant Minister, make a statement on funding to Snowdonia National Park Authority? Will you commit to investigating the devastating impact that these year-on-year cuts are having? And will you also explain how the Welsh Government will actually help our national parks financially to deliver on their own priorities? Thank you.

Minister for Finance and Trefnydd:

I'm aware of the pressure that the national parks are under, I'm aware of the pressure education is under, I'm aware of the pressure health is under, I'm aware of the pressure local government is under. And, if we want to talk about massive cuts, we can, because, on a like-for-like basis, the Welsh Government's budget is 5 per cent lower in real terms in 2019-20 than it was in 2010-11, equivalent to £800 million less to spend on public services, such as those with which Janet Finch-Saunders is concerned. Our revenue budget is 7 per cent lower per person than in 2010-11, so that's £350 less to spend on front-line services for each and every person in Wales. And, if our budget had grown in line with the UK economy since 2010, we'd have £4 billion more to invest in public services in 2019-20 than was available to us in our last budget. Now, the Member might sigh, but the blame for this lies entirely at the door of the UK Government and its austerity agenda. If Members don't like austerity, then they need to take it up with their party.