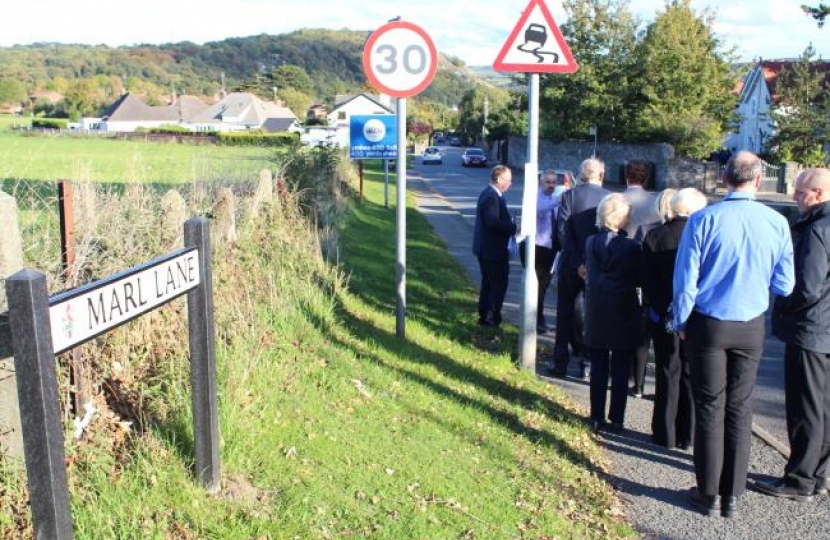 THE decision to allow 110 houses to be built off Marl Lane, Deganwy has been described as a kick in the teeth for democracy and has triggered a storm of protest.

It has also stimulated a call for legal action to be taken against the go ahead decision, and social media has been alive with protests.

Beech Developments of Llandudno Junction had submitted a planning application for the houses which was refused by Conwy planners, the company subsequently appealed against the refusal and a public inquiry into the decision was held last September.

The result of this inquiry was expected in November. However the decision was delayed until January.

The decision to allow the development to go ahead was announced this week.

There was a great deal of opposition to the application from local residents who conducted a well organised campaign calling for refusal.

Cllr Mike Priestley, one of the leaders of the opposition said: “Local democracy has been kicked in the teeth. Already residents have been contacting me saying they will continue the fight.

“We will be seeking advice about a judicial review, for example new information came to light about planning policy yet only the council and the applicant were asked for their views, what about the views of the 1300 objectors?

"We will be asking Welsh government to investigate and review this application.

"Because of this decision we will lose some beautiful green fields and some of the best agricultural land in Wales.

"We have argued all our services are under extreme pressure and allowing 110 dwellings at this location may very well overwhelm them."

He was supported by AM Janet Finch-Saunders who has committed to take the matter up in the Senedd.

She said: “This decision is a complete betrayal of the democratic processes available in our own communities.

“More than anything, the Inspector has overturned a decision of the democratically elected local planning authority who acted in the best interest of the communities we represent.

“This development deviates from the Local Development Plan, and as such we now have to question what the purpose of this was.

“More so, the whole handling of the planning inspection, from the delayed time frame to not allowing all interested parties to comment on the new planning policy introduced in December, has quite frankly been unacceptable, and I’ve already complained to the Welsh Government about this.

“Going forward, I will be calling on the Minister to review the whole planning inspectorate process, and make it far more accountable to the very residents it is there to serve.

"I will be holding the Welsh Government to account and seek to change the planning process to allow greater consideration to be given to the opinions of the people directly affected by an application."

Cllr Sue Shotter, who was also a leader of the protest said: “I am extremely disappointed to hear this news by the Welsh Government Inspectorate.

"It really makes me wonder how many objections it takes to prevent building in an over developed area.

"The problem is the decisions are made by people who generally don’t reside in the area, and so don’t understand the issues that local residents experience.

“Hopefully we will now have the opportunity for the Welsh Government Minister to review this and perhaps have a change of decision.”

Matthew Gilmartin, managing director for Beech Developments, said: "We are delighted at the decision by the planning inspector to grant permission for 110 homes at High Pastures, Deganwy.

"Conwy, like the rest of Wales, is falling behind in fulfilling its quota to build 20,000 homes by 2020 and this will go some way to helping the Welsh Government to achieve their target.

"Our focus on building highly sustainable, quality homes for the people of North Wales has not faltered for the 24 years we have been in business.

"Despite a series of setbacks and delays, we will look forward to working alongside local contractors and suppliers to create the 110 homes in Conwy using our in house design team."