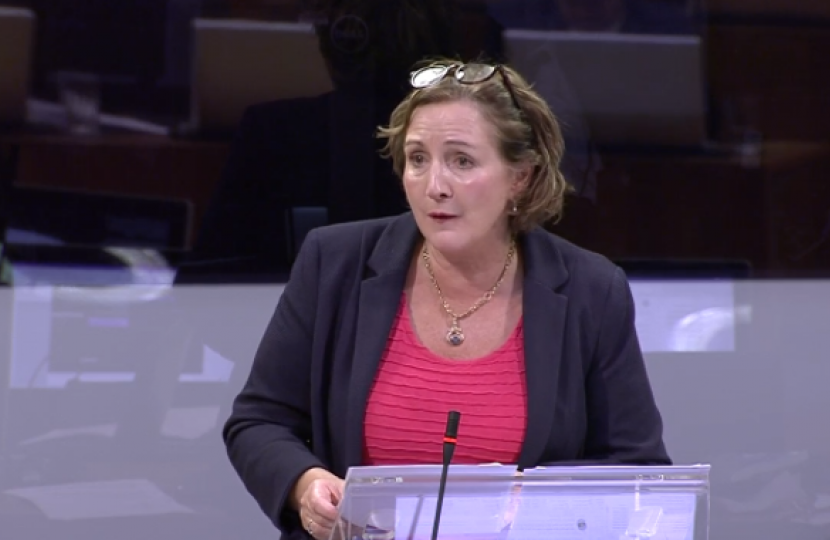 To propose that the National Assembly for Wales:

Notes the petition ‘P-05-869 Declare a Climate Emergency and fit all policies with zero-carbon targets’ which received 6,148 signatures.

Diolch, Llywydd. May I begin by expressing thanks, on behalf of the Petitions Committee, for the opportunity to open this debate today? The petition 'Declare a Climate Emergency and fit all policies with zero-carbon targets' was submitted by Matthew Misiak on behalf of the Extinction Rebellion campaign. This petition attracted no less than 6,148 signatures, and the Petitions Committee is bringing it forward today under the process whereby we consider requesting debates on petitions with more than 5,000 signatures, and it would be remiss of us not to thank the Business Committee members for their move to see this tabled for debate.

It is clear that no Parliament or Government can ignore the urgency of the challenge posed by climate change. Neither can we, as politicians and policy makers, fail to recognise the level of public concern in relation to this and other environmental issues such as biodiversity, plastic pollution and air quality. All of these issues are frequently raised, both in this Chamber and through the petitions process, and all are captured by this particular petition. Members will also be well aware of the wider protest and campaigning that has been orchestrated by the Extinction Rebellion movement, and which forms the backdrop to this petition.

The Petitions Committee has noted, of course, that the Welsh Government has indeed declared a climate emergency during the time since this petition was drafted. In a statement issued on 30 April 2019, the Minister for environment expressed her hope that the declaration

'can help to trigger a wave of action at home and internationally.'

Now, the petitioners describe this as 'an important step' and have congratulated the Welsh Government on being among the first Governments in the world to take this action. A number of local authorities, towns and cities across Wales have also made similar declarations, and I'm thrilled that my own local authority has done so also. So, it is apparent there is increasing recognition of the role that all parts of society must play in responding to a challenge on the scale of climate change.

However, there is no universally agreed definition of what declaring a climate emergency should mean in practice, and what action should be taken as a result. Therefore, I hope that this debate will assist in shining a light on the scale of that challenge, and provide additional clarity on the practical changes that will arise as a result of the Welsh Government’s own climate emergency declaration.

Indeed, whilst the Petitions Committee wholeheartedly supports the Welsh Government in taking this step, we also believe that the actions or changes that follow are more important than the declaration itself. Practical change is what is required to ensure that this amounts to much more than a symbolic measure. Beyond the headline declaration of a climate emergency, the petition also proposes a number of actions that the petitioners believe should be taken by the Welsh Government. I will now move on to briefly outline these in turn.

The petition calls on the Welsh Government to ensure that all its policies are consistent with the intention of averting further climate change and ecological collapse. The petitioners want to see detailed action plans produced, with time frames for progress towards making Wales a carbon-neutral country. They highlight the well-being of future generations Act as a good example of Wales leading the way in developing progressive policy, but argue too that, on its own, this Act does not motivate Government, as well as the public and private sectors, to act in accordance with the urgency of the situation. The petitioners press the Welsh Government to make further investments in the development of the green economy, and to stress the opportunity for Wales to be a leader in green technologies.

Moving on, the petition specifically calls on the Welsh Government to enact legally binding policy measures to reduce carbon emissions to net zero, not by 2050 but by 2025. It goes without saying that this is an extremely demanding call. Welsh legislation currently contains a target to reduce emissions by 80 per cent by 2050, with interim targets for the decades leading up to this. In May, a report by the Committee on Climate Change recommended targeting a 95 per cent reduction by 2050. This would form part of an intention to reduce UK greenhouse gas emissions to net zero by 2050. As Members know, the Welsh Government formally accepted this recommendation last week, and will be bringing forward regulations to update the target in legislation. I should note, however, that the 2050 deadline has been described as 'woefully inadequate' by the petitioners. The petition states—and the Extinction Rebellion campaign has been vocal about—the need to take this action by 2025. I am sure that the pace of the response to the challenges of climate change will be a topic for further debate this afternoon.

Finally, the petition calls for a citizens assembly to be established to oversee the changes required. The petitioners argue that Welsh citizens should be able to help develop and to scrutinise the policies that will actually underpin the degree of change that is required. They believe that such an approach will minimise conflicts of interest, and support politicians to make decisions for the long-term good of all. Again, this proposal is something that Members may wish to consider during their contributions this afternoon.

In conclusion, the Petitions Committee recognises the important steps already taken by the Welsh Government, not least through its climate emergency declaration and the commitments that the Minister has made. Nevertheless, we all need to continue to apply strong scrutiny to the concrete actions that must be taken, and we must all work together to develop effective solutions that will make these challenging commitments into a reality. I therefore look forward to listening to the rest of this afternoon’s debate. Diolch yn fawr.

Thank you, chair. Thank you, first of all, to the Members and, of course, obviously, to the Minister for responding to this, and I'll just touch on some of the points that have actually further added to this debate.

Llyr Gruffydd was quite right to point out increased temperatures and a real emphasis on the fact that a 2 per cent increase would actually be catastrophic—drought and even war that destroy, and the destruction of our ecosystems. Mark Reckless was actually quite right, also, to raise questions about how that net-zero figure equates, and what I can tell you is that the UK Government, in their advice, published in May 2009, state that while they recommend that the UK and Scotland should set a net-zero target by 2050 for the UK, 2045 for Scotland, it recommended that the Welsh Government should legislate for at least a 95 per cent reduction in all greenhouse gas emissions against the 1990 baseline by 2050. The new target could enter legislation in 2020, alongside Wales's third carbon budget. And it says:

'This target represents Wales's fair contribution to the UK target and hence to the Paris Agreement. It does not imply lower policy ambition or effort in Wales, but reflects the large share of agriculture emissions in Wales and lower access to suitable sites to store captured CO₂.'

The Minister has actually gone further and put:

'In view of this and the declaration of a climate emergency following publication of the plan, we believe whilst accepting the CCC advice—',

'we must go further. Therefore, on behalf of the Welsh Government I am declaring our ambition today to bring forward a target for Wales to achieve net zero emissions no later than 2050.'

So, there is clarification needed, you're quite right to point that out, as to how that net-zero figure—what it means.

Jenny Rathbone AM on the need for metro systems—we simply cannot afford any more carbon emissions, and you are quite right to point out that as we move forward with our house building—that too must encompass and realise the responsibility that that has to play and its part in reducing our carbon emissions. I've got to be honest, I really liked your point of 12 years to save the world. We're not talking 2050 here, we are talking not that far away.

So, I really appreciate all the comments, and, of course, Mandy, you also made some extremely good points about the public strength of feeling, not just Extinction Rebellion, but also, too, the fact that children are now so aware in our schools—we cannot let them down as politicians.

Mike Hedges, of course—I liked the point that you actually said about how we are actually facing—and it's not a word I can say really easily—apocalypse. But that actually does, in one word, for me, size up, really, what today's debate is about and how we really do need to move forward with this.

Someone said to me—it was a child at an event I went to. A child said to me, 'Why do we call it climate change? Change is something you do over a period of time. We really are now facing a climate emergency.' And I thought from a little girl came such wise words.

So, it only remains now for me, chairman, to thank Matthew Misiak, Extension Rebellion, and every single person who signed the petition and for actually having confidence in the petition system that their concerns, their views, would be aired, debated and discussed, with comments forthcoming from the Minister here in the National Assembly for Wales. So, thank you. Diolch yn fawr iawn.