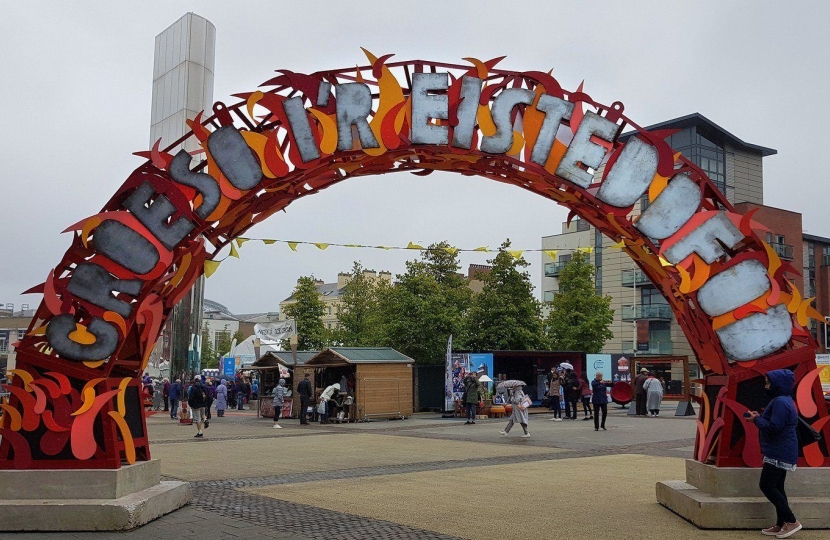 Following the finding by Janet Finch-Saunders, Assembly Member for Aberconwy, that the Welsh Government reduced its financial support of the National Eisteddfod this year, and subsequent calls from her for free entry to the Maes in Llanrwst, Baroness Eluned Morgan AM, Minister for Welsh Language and Lifelong Learning, has responded positively, putting “the ball in the Eisteddfod’s court”.

Janet’s question and the response from the Minister can be seen at the end.

“There is no doubt that the trial of free entry to the Maes in Cardiff Bay was a success.

“When considering that communities across Conwy are working tirelessly to raise £320,000 to pay for this important celebration of Welsh language, culture, and talent, and that the Eisteddfod is part of the strategy for achieving a million speakers by 2050, it seems obvious to me that the Welsh Government should be supporting free entry again in 2019.

“I am delighted that the Minister has not ruled this out, and made clear her willingness to discuss the possibility of free entry if the National Eisteddfod make their intentions clear.

“Evidently, it seems that the ball is in the Eisteddfod’s court.

“For the sake of fairness and giving the festival an improved chance of attracting a wider audience, I believe it is a necessity for the Eisteddfod to make clear its wish to have free entry”.

Further to WAQ77240, will the Cabinet Secretary provide the necessary financial support to the National Eisteddfod to ensure that there is free entry to the Maes in 2019?

Response by the Minister:

The National Eisteddfod have as yet not made clear their intentions as regards to repeating this year’s trial at Cardiff of offering free entry to the Eisteddfod Maes. We hold regular meetings with the Eisteddfod and intend to continue to work with them to see how we can build on the success of this year’s Eisteddfod in Cardiff Bay, and to consider how best to support the Festival to develop and attract a wider audience.