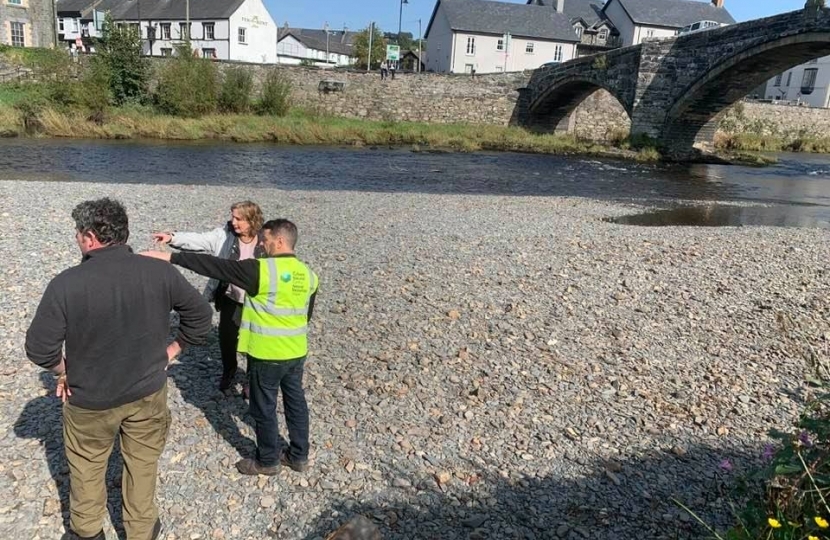 The Welsh Conservative Shadow Minister for Environment and the Member for Aberconwy – Janet Finch-Saunders MS – has today (22 February) spoken of her concern about an evident lack of clear scientific evidence being used by Natural Resources Wales to determine the impact that dredging will have on the River Conwy.

Replying to the Member’s local flooding report last year, the Welsh Government agency said that they “make decisions on the best way to tackle the risk on a case-by-case basis, using engineering knowledge and evidence of how each river responds to make sure we give best value to the taxpayer.” At the time, they claimed to have determined that the “scale of the event and volume of water that was seen in recent flood events would have exceeded any channel capacity gained by removing silt at Dolgarrog.”

In a reply to a letter sent this month, regarding local concern about a build up of silt on the riverbed, NRW has now said:

“We cannot justify using our limited resources in determining the impact of widespread dredging, particularly as funding of our maintenance programme is based on its impact on flooding to people and property.”

Mrs Finch-Saunders has again called for urgent clarification as to what recent scientific impact reviews have been undertaken by the agency to determine what impact river dredging will have, locally.

“Local concern about the build-up of silt on the riverbed must be addressed at an appropriate pace. Indeed, during recent flood events, a record level of water has been recorded at Pont Fawr on the Conwy River. Understandably, this is causing considerable concern as to the long-term stability of Llanrwst’s historic bridge, cafe, and embankment.

“Given the organisation’s previous suggestion that decisions on the best way to tackle the risk were taken on an individual and case-by-case basis, which was made in relation to my 2020 flood report, I felt that it was important to establish on what basis this important decision was operating.

“I have been less than pleased to receive a reply which indicates that, in fact, no recent scientific impact review into dredging the River Conwy has been undertaken locally, due to limited resources.

“This runs contrary to their assertion in my flooding report and undermines the trust that Conwy Valley residents have placed in the agency to deliver protection from flooding. I genuinely believe that the team at NRW have good intentions, but are overwhelmed.

“It is estimated that up to 70 additional staff are needed to sustain the overall service at the levels described by the actions and improvements in the February 2020 Floods in Wales report, but funding has instead only been received to employ 36 full time equivalents – this is half what is needed.

“As well as making the case for a new National Flood Agency to make sure that lessons are learnt and action taken to prevent damage in the future, I reiterate my calls for NRW to provide the engineering and scientific evidence used to state previously that the scale of the event and volume of water that was seen in recent flood events would have exceeded any channel capacity gained by removing silt at Dolgarrog.”

Photo: Janet Finch-Saunders MS/AS during last year's COVID compliant site visit to examine the build-up of silt on the riverbed around Llanrwst.