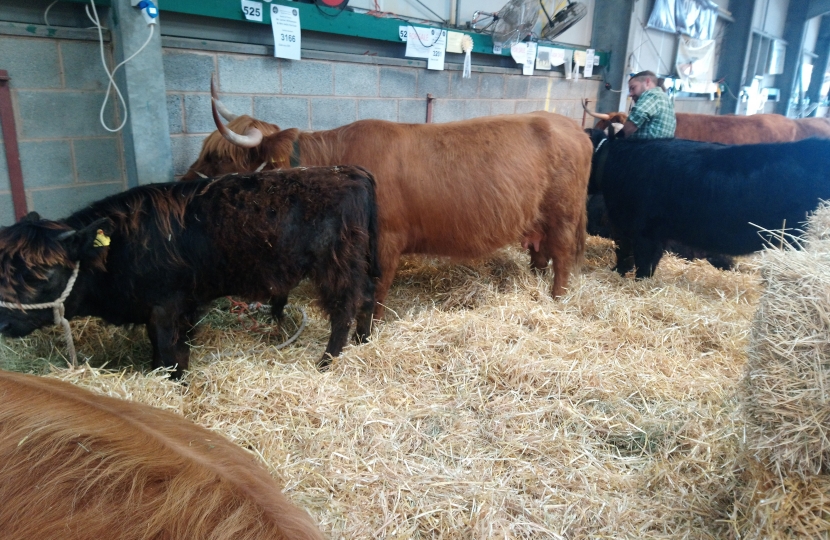 After finding that the recently published forecasts of farm incomes in Wales report that the average business income is expected to decrease by 15%, Janet Finch-Saunders, Assembly Member for Aberconwy, has championed farmers in the Senedd by putting pressure on the Welsh Government to introduce an agricultural volatility grant.

After receiving a commitment from the Lesley Griffiths AM, Minister for Environment, Energy and Rural Affairs, that such a volatility component can be considered as part of the next consultation on the plans for agriculture in Wales post Brexit, Janet said:

“Whilst I welcome the fact that the Minister has acknowledge the calls for farmers to be provided with volatility support, it is frustraiting that she has not given any assurances that the Welsh Government will provide the required help post-Brexit.

“The seriousness of volatility for farmers is apparent when considering that the average business income for a dairy farm is forecasted to have fallen by £20,000 between 2017/18 and 2018/19.

“More so, lowland cattle and sheep farmers are expected to have seen the lowest businesses income since 2015-16.

“Undoubtedly, market levers are out of our hands, but we certainly can and should take action to provide the stability farms need to continue producing food.

“As the President of NFU Cymru explained, Welsh farmers are integral to the success and continued growth of the £6.9 billion Welsh food and drink industry, and that progress can only be delivered through a strong and stable supply base.

“At the end of the day, I will continue to champion farming the Senedd and the provision of financial support because it is actually fiscally responsible to do so. Indeed, for every £1 invested in farms, there is a return of around £7.40 delivered”.

Will the Minister make a statement on the Welsh Government's response to the forecasted decrease in farm income?

Response by the Minister for Environment, Energy and Rural Affairs:

Thank you. Volatility is a feature of the farming sector, and businesses need to be resilient to deal with price and cost fluctuations. Welsh Government continues to support and equip farming businesses with tools to improve their understanding and control their cost of production.

Thank you. The recently published forecasts of farm incomes in Wales provides very worrying information about the sector. It reports that the average farm business income for the combined all-farm types is expected to decrease by 15 per cent to £29,500 per farm from the previous year. The situation is even more serious for dairy farmers, who are forecasted—sorry, I need my specs—a 23 per cent fall, and lowland cattle and sheep farmers, who are expected to have an average income of just £17,000. As John Davies, National Farmers Union Cymru president stated, the forecasts show the volatility all farm types in Wales are subjected to and reinforce the need for future agricultural policy in Wales to include a central volatility stability component. Will you consider introducing an agricultural volatility grant that farmers can turn to for support when market changes render continued business operation and food production financially perilous? Thank you

Response by the Minister:

Thank you. I'm obviously very aware of the information that was published. I think there's been a call—. Since we went out to consultation on 'Brexit and our land' last year—the first consultation—there's certainly been a call to have a component for volatility. I think it also shows that the basic payment scheme hasn't provided that cushion that farmers want to see. Members will be aware that I'm doing an oral statement very soon around the first consultation from 'Brexit and our land', and I have committed to go into a second consultation ahead of the Royal Welsh Show. So, obviously, these are things that can all be considered in that consultation.

Questions to the Minister for Environment, Energy and Rural Affairs: Farm Income (15/05/2019)