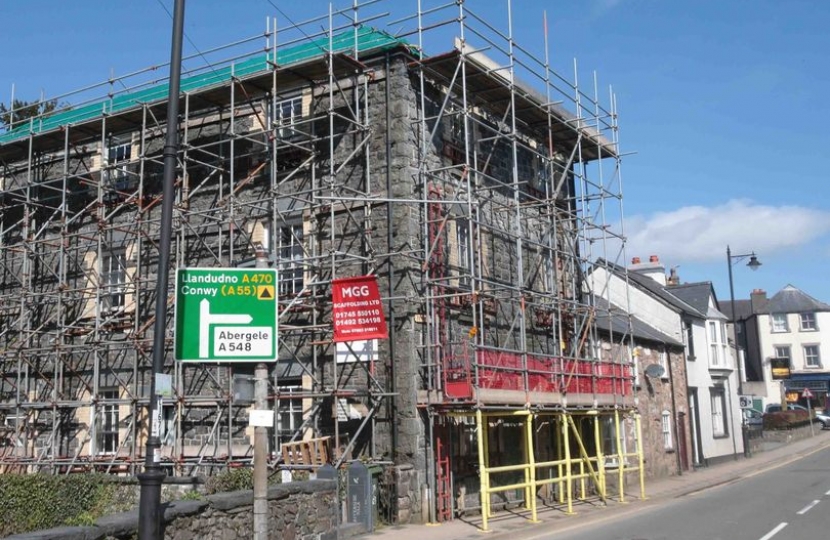 Conwy taxpayers have had to fork out more than £200,000 for scaffolding around a building they don't even own.

Scaffolding has surrounded Ty Glan Conwy in Llanrwst since June 2012. It had to be put up after the building was deemed to be unsafe. Debris had been falling into the grounds of the nearby Eagles Hotel. But plans to demolish it were put on hold when protected wildlife was found to be living inside.

Conwy Council erected the scaffolding when an Emergency Prohibition Notice was served after the building, which is in private ownership, was deemed unsafe. The building is in the conservation area and overlooks the River Conwy, Pont Fawr and Tu Hwnt i’r Bont.

The cost of the scaffolding to date is £199,128.60 with an annual cost of around £30k. Following the emergency work that the council had to do to make the building safe, attempts were made to recover the costs. However the freeholder had become insolvent and the Authority has admitted costs have not been recovered.

It has been listed as a local land charge which means that if the Freehold interest is sold then the new purchaser is then liable for paying these charges back to the Council. The building was supposed to have been demolished before the time of last year's Eisteddfod, but the local authority said demolition was impossible as bats were found roosting inside.

Llanrwst Town Council clerk Rosslyn Morgan, said in a statement on behalf of his council that it's believed Conwy will never be able to recoup its costs

"As for the significant costs and legal charges on the property, in reality my council believe that Conwy will never be able to recoup their costs.

"The value of that site will never come close to Conwy’s costs. I believe that eventually a proposal will be made to Conwy’s cabinet and council to write off all those costs.

"My Council has previously made a public statement expressing the view that notwithstanding the legal complexities pleaded by Conwy, the whole issue of Ty Glan Conwy has been a case of procrastination and failure to make decisive decisions at the appropriate time.

"It is now almost eight years since the first notice was issued by Conwy that the building was unsafe. Without any formal update from Conwy since early 2019, it remains unclear to my council as to the outcome of this whole issue."

"In August 2018, the Council obtained a Court order to demolish the building and started to get professional reports so that the appropriate consents and licences could be obtained for demolition work to take place.

"However, a bat survey found evidence that bats had recently gained entry into the building and were using it as a roost. Under the Conservation of Habitats & Species Regulations 2017, demolition could therefore only take place at certain times of the year and a licence would need to be obtained from Natural Resources Wales giving details of the proposed mitigation measures for the bats. This meant that work to demolish the building could not be carried out in time for the Eisteddfod."

The spokeswoman said as the work on site isn't being carried out by the council, they "can't comment on progress", and added the current restrictions in relation to coronavirus "will have limited recent progress".

Janet Finch-Saunders Aberconwy AM said there had been "very little progress". She said:

“This issue has been ongoing for years and has seen very little progress.

“I encourage interested parties and the Local Authority to take any action necessary to ensure that the building is safe.

“Be that demolition or structural work, the priority must be ensuring the health and safety of individuals entering and passing the building.

“It is unsustainable to keep spending on scaffolding, so it is time that the people of Llanrwst be provided with a clear plan of action for the site."