Statement by the Deputy Minister for Health and Social Services: The Children (Abolition of Defence of Reasonable Punishment) (Wales) Bill (26/3/19) 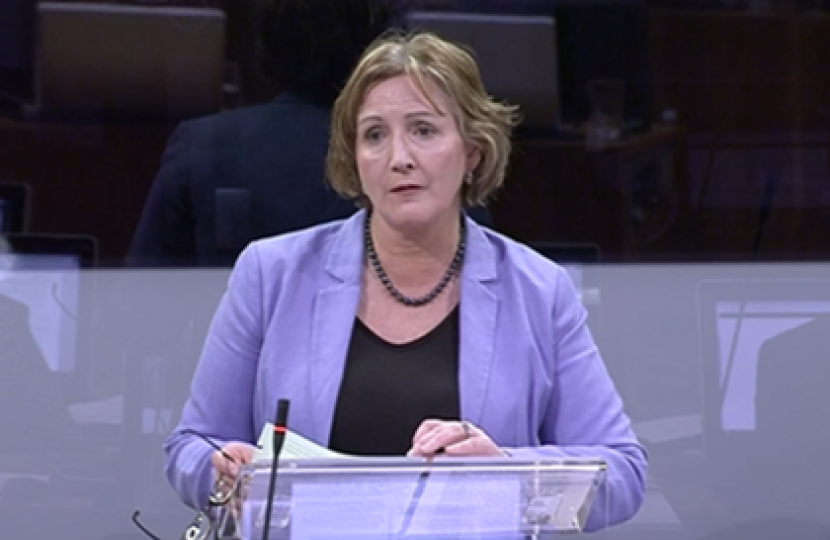 Diolch, Deputy Presiding Officer. I have to start at the onset by saying that I really do respect the Member in question bringing this Bill forward for the work that you've done and you continue to do in safeguarding our children across Wales, and I share in your hopes, your aims and your ambitions on much of the work that we seek to work together on, but, I think, on this one, I would like to reference the fact that you say that there's been a desire to have this since 2002—I still don't believe that we're there yet when it comes to the evidence that makes this Bill actually right to be bringing forward at this time. Because, as you've rightly pointed out in your own statement, Deputy Minister—you do make the point that you're currently collating the impact this Bill will have. There isn't the data out there that tells us how big the problem is in Wales and, so, for me, I like to see legislation passed by this institution that actually is going to make a difference and this currently is so subjective an issue I think all constituency AMs will already have started receiving correspondence, and the scales of balance at the moment in my own constituency are such that the concerns that are coming forward already on this actually tell me that there's more work to be done before this is introduced as a piece of legislation.

Now, I note that this is technically—. I mean, we have a bilingual Bill coming before us, but it is literally on one side of an A4, and, for me, I'll just reiterate why I'm concerned: this is a Bill that will remove physical punishment as a reasonable defence and prohibit smacking as an acceptable mode of punishment. Firstly, as evidenced by my own role on the Children, Young People and Education Committee, I want to make it clear right here and now that I too believe that I'm an advocate also for standing up for our children's rights and those who are particularly vulnerable. Now, child:

'States Parties shall take all appropriate legislative, administrative, social and educational measures to protect the child from all forms of physical or mental violence'.

Now, I'm confident that all of us here will agree that child abuse is intolerable and violates the Children Act 2004 and the UN Convention on the Rights of the Child. No child should be subjected to abuse, whether that be physical, emotional or coercive control, yet this Bill does not encapsulate the full breadth of abuse that some children can be predisposed to and merely proposes to remove smacking and physical punishment as a reasonable defence.

Now, the Member stated also in her statement that this kind of behaviour is associated with antisocial behaviour, and the other issues that I've raised—. I believe that emotional abuse and coercive control and behaviour over children is equally as damaging as actual physical—. Now, I feel this Bill de-contextualises smacking from the broader issue of abuse—and that's what we're really talking about here—that is chronic, systematic and intentional. As we are all well-aware, physical, emotional and coercive abuse often go hand in hand, and, according to article 19 of the UN Convention on the Rights of the Child:

'to protect the child from all forms of physical or mental violence'.

This Bill does not do it. Crucially, this proposed Bill lacks the necessary detail and clarity. First, it isn't clear how much this Bill would cost, how this Bill would be successfully implemented by health visitors, and how this Bill would be enforced at the ground level. Now, when we talk about cost, we're talking now about social service departments across Wales that are already seriously underfunded, and it may well be a situation, should this Bill be passed, that a report is made, a family is visited, and then the resources—of the police, the health visitor, the local authority, the social service department—I do think we need to be very clear about the associated cost. Furthermore, it is unclear what definition of smacking this Bill is premised on. When we met, there was a difference of opinion, if you like, on what constitutes an actual smack; there was disparity between your own definition and interpretation of that, and even compared to your private secretary's. There's this issue around literal and technical interpretation.

For public behaviour to change, and for this Bill to work in practice, this clarity is essential, as it would determine the literature and parental guidance that will be available for parents, and of course the very enforcement of the law. The enforcement of this law—you know, how are we going to police our homes? Are you not worried that this may actually drive families apart, when accusations are made, when families, for whatever reason—the pressure on our families now, the pressure on relationships, inter-relationships with new families. I really do think more work has to be done on this. Now, despite the Minister's comments that public support of non-physical discipline has increased, from 71 per cent in 2015 to 81 per cent in 2018, it is absolutely unclear how the public will receive this Bill, and whether such a measure will be deemed an interference to parental judgment and families' private lives.

I certainly don't believe that this institution, or the Welsh Government, should seek to criminalise our families, or our parents. And I would urge the Deputy Minister to perhaps go back to the drawing board, and bring forward a Bill that encompasses far more—something that we can all work with, cross party, to ensure that our children are protected from all forms of abuse. Thank you.