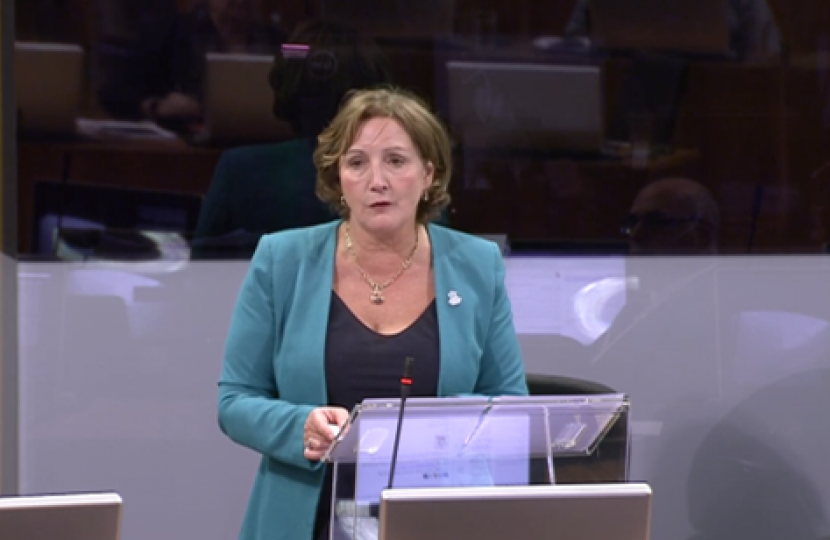 The plastic plague and pollution is a global worry. It is also a huge problem for us here in Wales, and no more so than in Aberconwy. I'm sure I'm not alone as an Assembly Member—we've carried out beach cleans with the Marine Conservation Society, NFU Mutual, and many of our residents. The things that we find there—mainly plastic, from bottles to cigarette stubs, which contain plastic also. I know, at my last beach clean, one member of the public just spent about half an hour and, around one of the benches on the promenade in Llandudno, 308 cigarette stubs. Sadly, that is just typical of so many of our beaches across Wales. For every 100m of Welsh beaches cleaned, an average of 53 drink containers are found. Residents report plastic waste in hedgerows beside the A470. Trefriw community council is admirably working to combat the waste caused by wild camping around Llyn Geirionydd. And, only last Friday, I had a meeting with a resident promoting alternatives to plastic. She'd actually been to Kenya and actually come back with—. Even in Kenya, over there, they are so in tune with what's going on and they are now banning the use of plastic bags in supermarkets and shops and things.

Clearly, combating plastic waste is a priority, so I welcome the debate today to highlight how the Welsh Government could and should be doing more for Wales, and the overwhelming majority of residents now, who are switched on, who are in tune, and they are simply unhappy with the use and the throwaway society of plastic that we have. Keep Wales Tidy's 'How Clean Are Our Streets?' report found that there has been little change in the presence of drinks litter since 2013-14. Plastic-related incidents reported to the RSPCA have increased almost 29 per cent between 2015 and 2018, and, according to WRAP Cymru, whilst Wales produces 400,000 tonnes of plastic waste per annum—an increasing figure—just 33 per cent of plastics are recycled.

Wales could be a world leader in recycling, and actually boasts itself to be so, but 17 local authorities have reported a decrease in reuse and recycling rates. The situation is even worse, as we know—Andrew Davies quite rightly pointed out that plastic waste exported from Wales has been found dumped in Malaysia, and personally I don't blame Malaysia for returning plastic waste, because I believe that we too have a moral and environmental obligation to target and to treat our own trash trouble.

At the end of the day, poor waste management and not properly getting to grips with plastic pollution contradicts the goal—one of the main goals—in the Well-being of Future Generations (Wales) Act 2015, of having a globally responsible Wales. Positive progress can be achieved through creating a circular plastic economy, which could be greatly facilitated with better grants to help businesses boost use of recycled plastics. Finance can be used as an incentive, too, for the wider public to recycle, especially through the use of a deposit-return scheme, and I thought that the initiative brought forward that David Melding mentioned was absolutely fantastic. Why we haven't got those now in the Assembly, I have no idea.

This solution is very close to my heart. The need for this is clear when considering the plastics that are now being found, that our recycling rate for bottles is lower than other parts of Europe—around 70 per cent here in comparison to 94.5 per cent in Norway—and the fact that 3 billion plastic bottles are thrown away in the UK. England and Scotland have committed to introducing a deposit-return scheme, whilst all we seem to be doing here is talking about it, consulting about it, but not actually putting it into action. YouGov and the MCS have shown that 71 per cent of people in Wales support the introduction of the scheme, as does my counterpart Julie Morgan. So, I implore the Minister to get going and give us one.

Similarly, we need to give serious consideration to other areas where the UK Conservative Government is leading the way. These include the intention to ban, with reasonable exceptions, the sale of plastic straws, plastic-stem cotton buds and drink stirrers in England. I could probably name another 100 items that I'd like to see banned. According to Surfers Against Sewage, this is a really positive and bold step in the right direction in the battle against plastic pollution.

I agree, and have earlier this month written to my colleague Hannah Blythyn AM, asking about the use of plastic straws at Cardiff Airport, finding that only WHSmith now seem to continue to have such straws on site. Overall, the UK ranks second in the EU for the consumption per capita of straws and stirrers and first for cotton buds. These embarrassing figures are unsurprising when considering that the amount of plastic straws used within the public sector is actually increasing, and has done so by over a 0.25 million since 2013-14. So, whilst we are talking about it here today, it is still happening. So, Minister, please listen to our debate. Please do not 'delete all'. Support our motion, and let us all work together across this Chamber to see the eradication of plastic everywhere. Thank you.